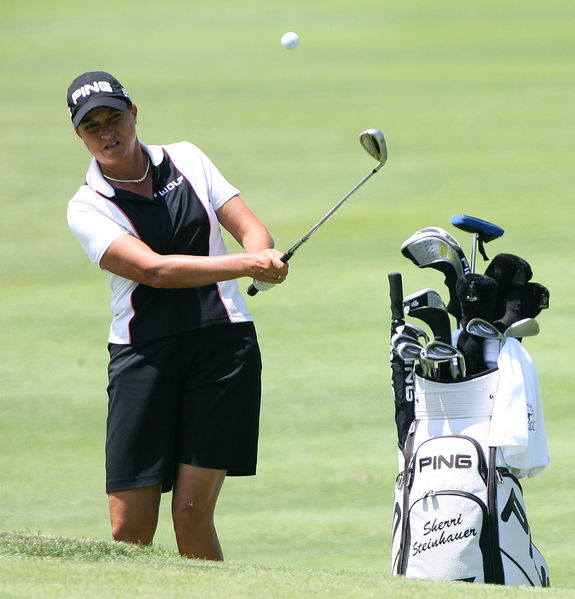 Hayden, ID, December 12, 2019 – Pickleball, one of the fastest growing sports in the USA is surging in popularity as country clubs and golf resorts continue to integrate pickleball programming to their line-up of activities. To better capture the excitement around Pickleball’s growth and popularity in the golf community, Selkirk Sport, the leading Pickleball paddle and accessories brand announced that former LPGA star Sherri Steinhauer will be a special guest on Selkirk on Serve – a Pickleball Podcast.

Steinhauer enjoyed a successful 26-year career on the LPGA TOUR, capturing 2 Major Championships and 10 professional victories. A 4-Time member of the United States team that captured the Solheim Cup, Steinhauer is now a passionate professional pickleball player. Steinhauer recently joined Selkirk on Serve host Morgan Evans to discuss her golf career; her introduction to pickleball; the incredible growth of the sport; USA Pickleball National Championships at the acclaimed Indian Wells Tennis Garden, and professional golfers that are embracing the sport, among other topics.
The host of Selkirk on Serve is Morgan Evans, an Australian native and Team Selkirk ambassador, who serves as the Director of Pickleball at Shadow Mountain Resort in Palm Desert, CA. Evans is a sought after pickleball instructor, serving as the coach for the sport’s elite players, including, Tyson

McGuffin one of the top pickleball players in the world and Kaitlyn Christian, a Professional Tennis Player who was recently ranked in the Top 40 in the world in doubles by the World Tennis Association (WTA).

Click a link below to listen to Sherri Steinhauer on Selkirk on Serve – A Pickleball Podcast:

Pickleball combines elements of tennis, Badminton and Ping Pong, and is one of the fastest growing sports in the USA with more than 3.3 million players today. Selkirk Sport, a family-owned business based in Hayden, Idaho offers a full line-up of paddles and accessories for players of all ages and skill levels, highlighted by the innovative AMPED™ Series.

Selkirk Sport, a Made-in-the-USA Manufacturer of Pickleball paddles and accessories, is a family-owned and operated company based in Hayden, Idaho, located in the shadows of its namesake, the Selkirk mountain range. Founded in 2014, Selkirk Sport is born off a passion for sport, as well as the great western outdoor leisure lifestyle that was afforded to the Company’s founders, Rob and Mike Barnes, along with their father Jim, who is Selkirk’s production manager. Backed by the philosophy of always pushing the limits, Selkirk Sport is committed to manufacturing products that deliver the highest performance with unmatched quality and service. As part of their early success, Selkirk Sport was the very first Pickleball manufacturer to offer an unprecedented lifetime warranty on its high-performance products. And, to meet the demands of the game’s premier professionals, the Company developed low-profile edgeguards that are lightweight and extremely durable. In just three years, Selkirk Sport has become one of the industry’s fastest growing companies, and their paddles are used by many of the game’s premier players, such as Tyson McGuffin, Morgan Evans, Cammy MacGregor, Kaitlyn Christian and a host of others who are premier players and national/regional champions.

Pickleball was invented by three dads in 1965 as a way to entertain their children during summer. The families resided on Bainbridge Island, Washington. Congressman Joel Pritchard, Bill Bell, and Barney McCallum fashioned handmade equipment and based the simple rules on the existing sports of tennis, badminton, and ping-pong. Unlike Tennis, Racquetball and many other sports, Pickleball has a short learning curve; you don’t need months of lessons to participate in a fun game. It also is less running compared to Tennis. However, at the same time, it can be very competitive and addicting for all ages, as well as an excellent, fun family activity. Pickleball can be played as both a singles and doubles game, and can be played inside or outdoors, on a court that uses the dimension of a doubles badminton court, along with a modified tennis net. A Pickleball court is 20’ x 44’ for both singles and doubles. The net is hung at 36” at the ends and hangs 34” in the middle. A non-volley zone – called the Kitchen – extends 7’ back from the net on each side.