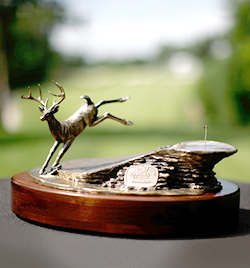 Tournament set to return in 2021; PGA TOUR looks to fill July dates with another event

SILVIS, ILLINOIS and PONTE VEDRA BEACH, FLORIDA – Citing ongoing local and state-related challenges related to gathering restrictions, the John Deere Classic, title sponsor John Deere and the PGA TOUR announced today that the 2020 tournament, scheduled for July 9-12, has been canceled. It is set to return to the PGA TOUR schedule in 2021 with its 50th playing.

As a result of this decision, the PGA TOUR announced that it will fill the week vacated by the John Deere Classic with a new tournament. The TOUR will provide details in the near future on the venue and location.

“Because of the ongoing health and safety concerns related to the coronavirus pandemic, the difficult decision was made to cancel the 2020 John Deere Classic,” said tournament director Clair Peterson. “While we considered several alternatives for the Classic, this was the choice that made the most sense for our guests, the players and the Quad City community at large.”

“We understand and respect that the Quad Cities market has dynamics and challenges that prevent the playing of the John Deere Classic in 2020,” said Andy Pazder, PGA TOUR Chief Tournaments and Competitions Officer. “As we’ve seen through the years, the community support for the John Deere Classic is unwavering and I have no doubt the event will return stronger than ever in its 50th playing in 2021.”

Despite the cancellation, the John Deere Classic will continue its Birdies for Charity fundraiser for 2020. Last year, $13.8 million was generated in support of 543 local and regional charity organizations, bringing the tournament’s all-time total to $120 million since the first playing in 1971. Ninety-nine percent of that has come since John Deere assumed title sponsorship in 1998.

This year’s John Deere Classic would have been the Quad Cities’ 50th PGA TOUR event and the 21st played at TPC Deere Run. Dylan Frittelli is the defending champion.

The PGA TOUR, headquartered in Ponte Vedra Beach, Florida, co-sanctions more than 130 tournaments on the PGA TOUR, PGA TOUR Champions, Korn Ferry Tour, PGA TOUR Latinoamérica, Mackenzie Tour-PGA TOUR Canada and PGA TOUR Series-China. Members on the PGA TOUR represent the world’s best players, hailing from 29 countries and territories (93 members are from outside the United States). Worldwide, PGA TOUR tournaments are broadcast to 212 countries and territories in 23 languages. Virtually all tournaments are organized as non-profit organizations to maximize charitable giving. In 2019, tournaments across all Tours generated a record $204.3 million for local and national charitable organizations, bringing the all-time total to more than $3 billion.