1,000 Golfers in both the U.S. and Europe Tracked Across 13 Statistical Categories

From Driving Distance to Putts Per Round, and Even Total Rounds Played, U.S. Golfers Outpaced Golfers in Europe; With Shot Scope Products Used in Over 100 Countries, Company Tracks Every Customer Shot While Capturing Game Improvement Data from Players of all Handicap Levels

Edinburgh, UK – As the best professional golfers in the world prepare to compete in one of sports’ greatest team competitions, Shot Scope (www.shotscope.com), a leading international manufacturer of GPS-based golf management systems, including the award-winning V3 Smart Golf Watch, today released the results of a performance analysis study of golfers in the U.S. vs. Europe. Based on 13 statistical categories, such as driving distance, average score to par, putts-per-round, and greens in regulation, golfers in the U.S. defeated Europe in statistical playoff 7-6.

“Shot Scope products are proven to promote game improvement and being able to track golfers across multiple statistical categories establishes a benchmarking system that players can use to improve and lower their handicaps,” said David Hunter CEO, Shot Scope. “With the eyes of the world on golf, as the best players from the U.S. and Europe square off in the ultimate team competition, we thought it would be fun and informational to showcase how everyday golfers in the U.S. perform versus their European counterparts.”

As part of its U.S. vs Europe game performance analysis, Shot Scope tracked 13 categories (see chart below) for 1,000 golfers each from the U.S. and Europe, all who had the same total score to par in 2020. Among the key statistics, U.S. golfers won 6 categories, highlighted by driving distance and number of putts per round. European golfers also captured 6 categories, highlighted by greens in regulation, average score to par and up and down %. In a one-stat playoff, U.S. golfers edged out Europe in total hole outs by a score of 237 to 211. Additionally, and aside of performance statistics, the analysis showed that European golfers played an average of 5.76 rounds per month compared to the U.S. golfer’s 4.28.  European golfers also played more courses, by an average of 2.84 courses per month compared to the U.S. golfer’s 2.36.  However, U.S. golfers play on longer courses than European golfers – 6239 yards to 6176 yards. 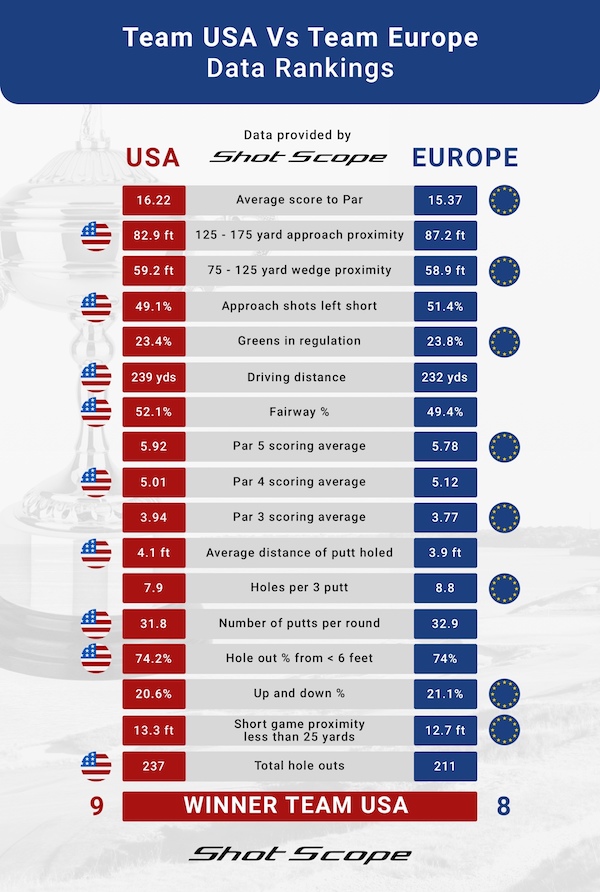 In addition to helping golfers lower their scores, the data captured by Shot Scope has enabled the Company to create a wealth of information that highlights where golfers are trending with shot making and how they manage their game on the course. Among the key data points aggregated from Shot Scope’s over 100 million recorded shots include:

Adds Hunter, “What makes Shot Scope data so important is that we track golfers of all handicap levels across 100 countries, including the US, UK, Canada, Japan, Australia, New Zealand, Europe and Argentina. Thus, we have our finger on the pulse of game improvement worldwide and our GPS Smart Watch technology is showing measurable success among every type of player.

As part of its Performance Tracking Platform, Shot Scope recently unveiled its 2021 Strokes Gained e-Book, which offers a complete benchmarking of traditional performance statistics, comparing golfers of handicap levels and how they perform in the following areas: Average Score to Par; Fairways in Regulation; Greens in Regulation; Short Game Up & Down; Average Putts Per round; and Average Number of Penalty Shots Per Round. The e-book, which is available for free download at https://shotscope.com/golf-ebooks/, includes a detailed analysis on the limitations of these traditional statistics, as well as an in-depth presentation on strokes gained and how to best evaluate data for marked game improvement.