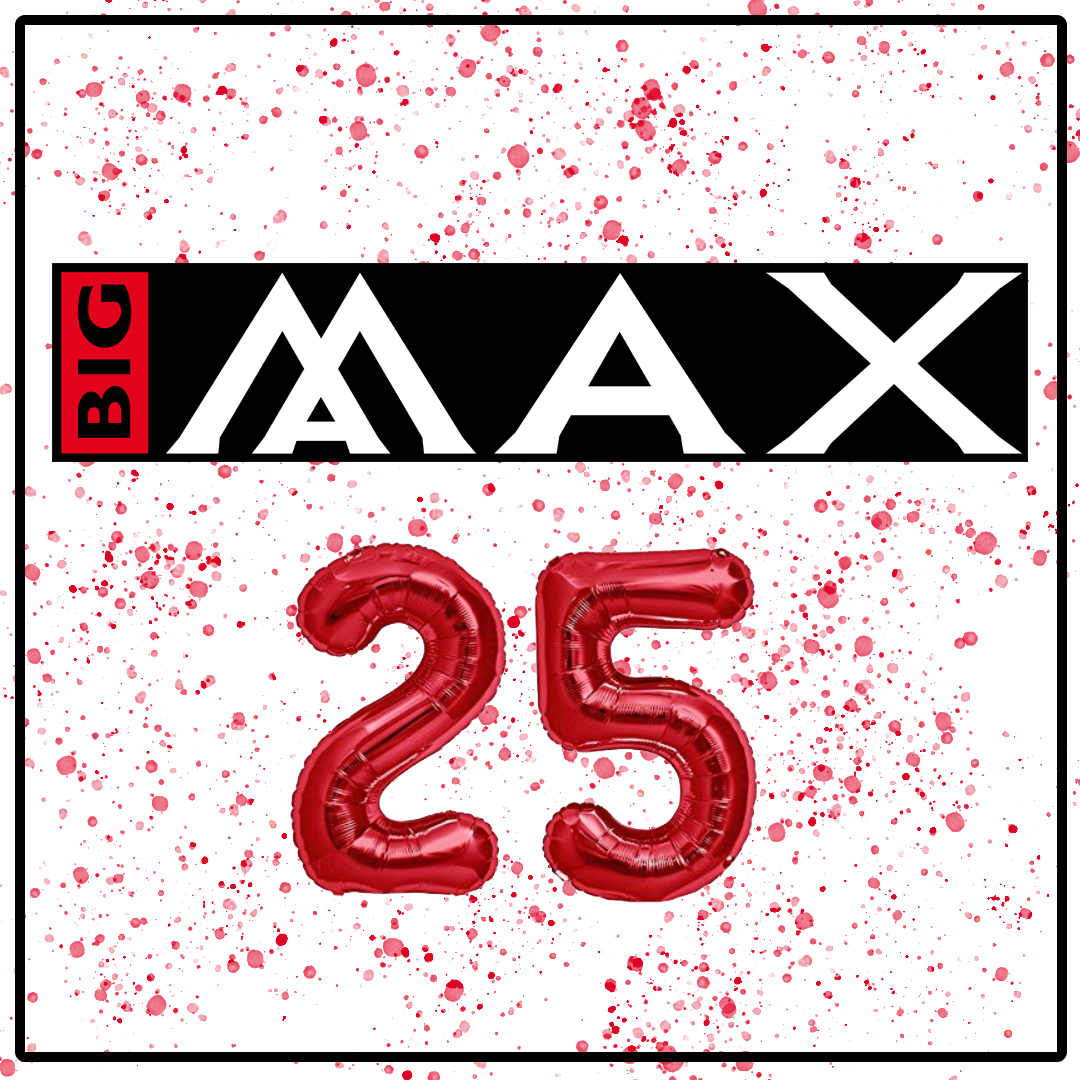 25 years ago, while tinkering with an old 2 wheel pull cart, Thomas Reiter had an idea. A few hours later, with a third wheel fixed to the front of the cart, Thomas had the initial prototype for Europe’s first 3 wheel push cart and had taken the first step in the evolution of Europe’s #1 push cart brand, and continental Europe’s #1 golf bag brand – BIG MAX. 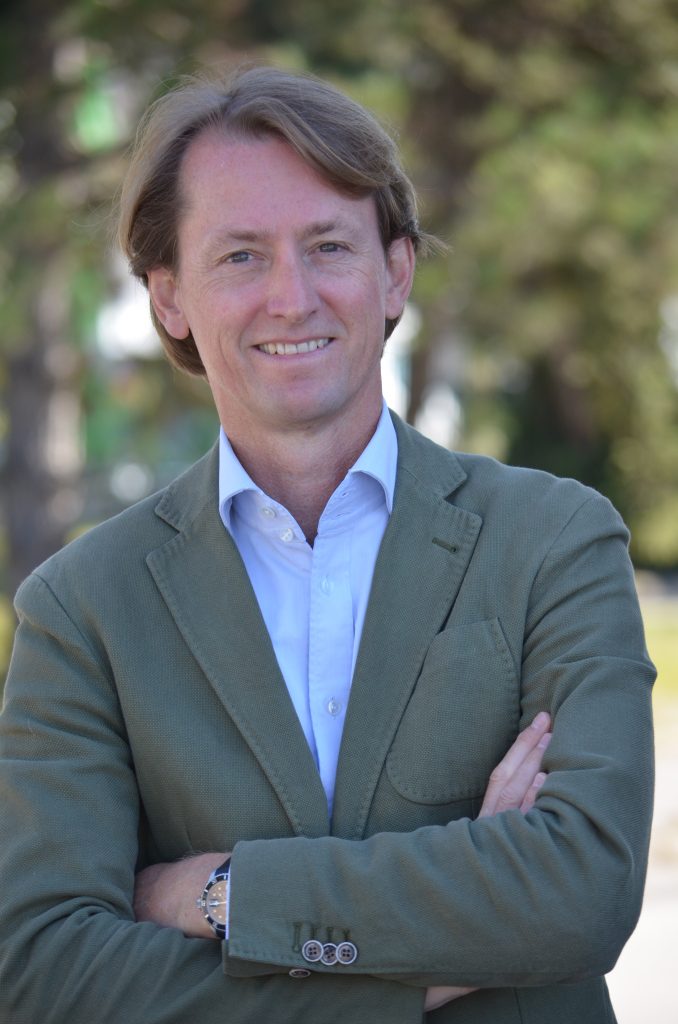 “I had set up my company, Golftech, in 1988 while I was studying at the Vienna University of Economics and Business. We mainly imported U.S. and U.K. products that were difficult to get in Europe and became quite successful,” comments Thomas. “In 1994 we decided to make our own pull carts as there was a clear gap in the European market. My son Max had just been born so I named the company after him – BIG MAX.”

“The initial models, Basic and Mid-Max sold well, but it was while I was playing around with an old 2 wheel pull cart that the business changed forever. I figured that it would be less stressful on the body to push the cart and that you could direct it more easily with it in front of you. So I fixed an extra wheel to the front of one of our competitors models and tried it out.”

The first BIG MAX 3 wheel cart – the BM 500 – went into production in 1997 and immediately changed the way that the Austrian and German market thought about push carts. But it was in the year 2000 that BIG MAX became the dominating force in the market.

Thomas continues, “In 2000 we introduced the Ti 1000. I’ve always thought that there are really only two spaces in the golf market – the cheapest and the best – and everything we do at BIG MAX is focused on being the best. So we invested heavily in the Ti1000, coming up with the straight axle design that brought a huge amount of stability to the cart and allowed it to fold to a compact size.” 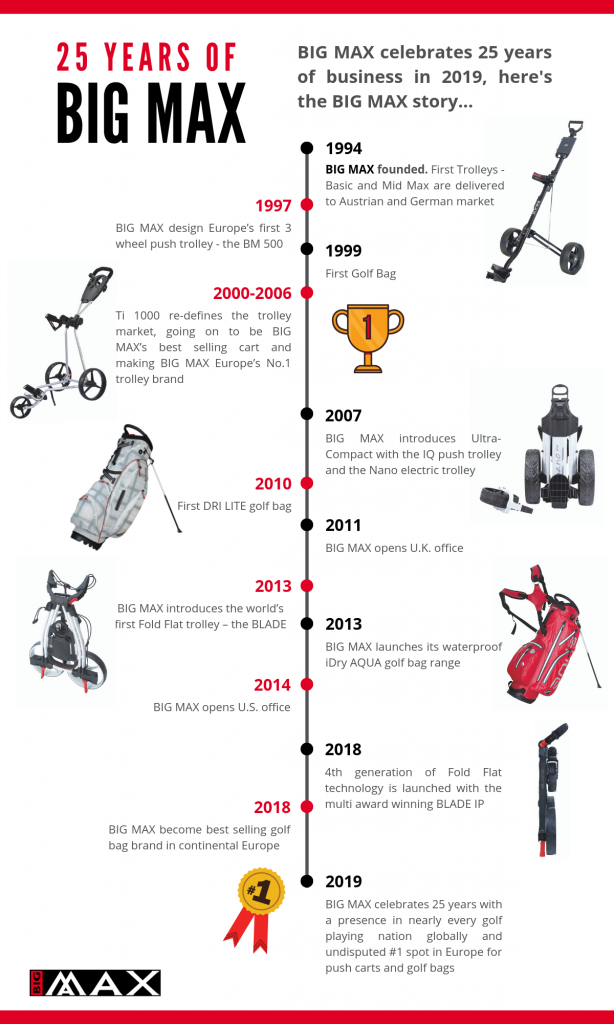 “The impact was immediate. The Ti1000 was a huge success. It gave us a platform to expand into the whole of Europe and it really changed the way that European golfers thought about transporting their bags. Up to this day I think it is still the best selling push cart that Europe has ever seen.”

Innovation and heavy investment in R&D remain pivotal in the success of BIG MAX. That approach has seen the brand lead the way with the first ultra-compact folding carts for both push and electric models (IQ and Nano), waterproof golf bags (Aqua line) and latterly, the unique, multi award winning Fold Flat design of the Blade series. But with imitators around every corner Thomas knows that there is only one way to stay successful.

“Our whole business model is based on being ahead of the pack. We often see products that have clearly been ‘inspired’ by our innovations – just look in any golf retailer to see the number of lookalikes of our IQ cart. But when they get to market we’re already launching the second, improved, generation of the product and are already working on the third generation. We often have to resort to the courts to defend our intellectual property – in fact that is what inspired the name of our BLADE IP – but that is the price we have to pay for doing all we can to be the best and be the first to market.”

In 2014 BIG MAX moved into the U.S. market with the creation of BIG MAX USA, a U.S. company based in Tacoma, Wa. The success that the brand enjoys in Europe has quickly translated to this side of the Atlantic with its Fold Flat, lightweight push cart technology winning multiple awards and its waterproof and water resistant golf bags becoming one of the fastest growing bag brands in the U.S.

On the 25th anniversary of BIG MAX it is clear that this unique brand has changed the landscape of the cart and bag market worldwide. But with award winning designs and an enviable position in the market, keeping to the ethos that the company has had since day one is what makes Thomas the most proud of his achievements.

“We’ve been the most owned push cart brand in Europe for nearly 20 years, we’re continental Europe’s #1 golf bag brand, we have a presence in virtually every golf playing nation – 56 so far – and we’re growing at a phenomenal rate in the U.S.” concludes Thomas. “But at their core, our products are designed to make golfer’s lives easier and help them have fun with their game. To know we’re doing that on such a huge scale makes me very proud.”

Anyone wanting to join BIG MAX in it’s birthday celebration can follow them on social media for the chance to win the award winning Blade IP and an Aqua Sport 2 waterproof cart bag. 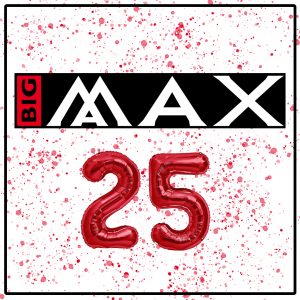 BIG MAX has been Europe’s #1 push cart brand for 20 years following the unprecedented success of the world’s first 3 wheel push cart the Ti1000. Available in virtually every country that plays golf, BIG MAX is a name that has become associated with quality and innovation. It’s most recent advancement, Fold Flat technology, has seen BIG MAX pioneer push carts that fold down completely flat, in some cases to less than 5” deep. BIG MAX has furthered its reputation for innovation with its AQUA and DRI LITE technology that in the last quarter of 2017 matched BIG MAX push carts by becoming #1 golf bag and travel cover brand in Germany, a traditional marker for # 1 in in continental Europe.