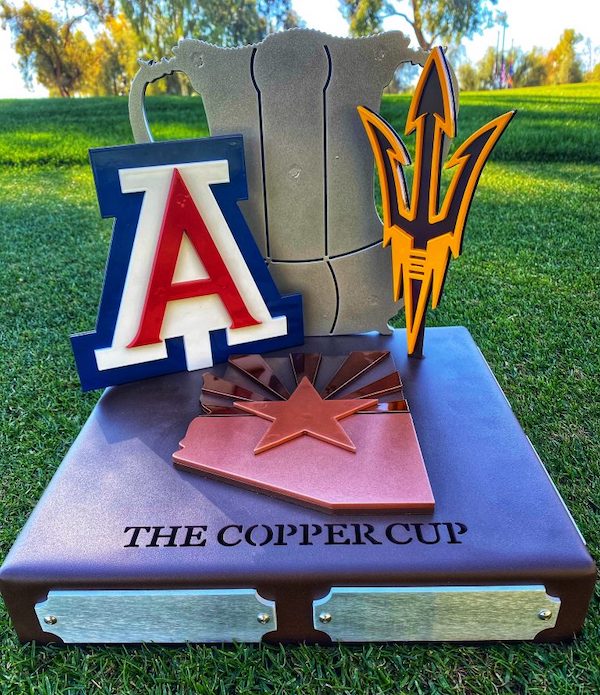 Maricopa, Ariz.  – In-state rivals, the University of Arizona and Arizona State University men’s golf teams, will square off in the second annual Copper Cup, a two-day, four-round match January 16 and 17, 2022 at Ak-Chin Southern Dunes Golf Club in Maricopa, Ariz. The inaugural Ryder Cup-style event held in 2021 was won by Arizona State as David Puig pulled out a singles win to lead the Sun Devils to a one-point victory. Puig birdied the 16th hole, then parred 17 and 18 for a 1-up win over Briggs Duce to clinch a 12.5-11.5-point win.

Ak-Chin Southern Dunes Golf Club and the two universities are encouraging fans to attend the 2022 Copper Cup as stands will be set on the 1st and 18th holes to take-in the action. The Copper Cup will be free to attend. The teams will play four four-ball matches on January 16 in the morning, followed by eight singles matches in the afternoon. On January 17, four matches with foursomes will take place, followed by eight singles matches in the afternoon to finish. Each match will be worth one point, while ties will be awarded a half-point to both sides. Twenty-four points are awarded, as it will take 12.5 to win the Copper Cup. Selection of pairings for both daily matches will be done live the night before between coaches and made available to all players and public immediately.

“Everyone loved last year’s Copper Cup. What started as a quasi-exhibition event, turned into an intense competition that came down to the final holes,” said ASU Men’s Golf Head Coach Matt Thurmond. “I believe all the match play practice really helped us at the NCAA Championship.  The second Copper Cup will be even better and we can’t wait for it. Our team is spending the off-season training with the Copper Cup on their mind as it is the first college golf tournament of the spring. We hope to see many Sun Devil and Wildcat fans out there cheering on their teams.”

“The Copper Cup is a major for our team,” said Arizona Men’s Golf Head Coach Jim Anderson. “The tournament provides us so much to debut the championship segment of our season. Ak-Chin Southern Dunes is championship course with conditions, and the speed, firmness, and overall course set up require discipline and smarts. The format, both Match Play and Team, give eight players a chance to score meaningful points, something we see very little prior to the postseason. Of course our opponent too, will have our full attention as we know both programs are poised for success independent of one another. Lastly, the rivalry adds to the week where players and fans on both sides can easily relate.  Our team couldn’t be more excited about the opportunity to open up at The Copper Cup and we are very appreciative for the staff and community’s efforts to kick off the college golf season.”

“Our goal in 2021, with the inaugural Copper Cup, was to create an event that had such a great feel and buzz that everyone would want to make it an annual event – we accomplished that goal,” said Ak-Chin Southern Dunes Golf Club General Manager Brady Wilson. “Now, in 2022, our mission is to take this event to the next level by inviting fans.  We want to create a Ryder Cup-like atmosphere for these teams. With the caliber of players from each university, I believe a number of them will be playing in a future Ryder Cup!”

In October 2020, the NCAA announced that Ak-Chin Southern Dunes Golf Club will be a host site for the 2026 Men’s Golf NCAA Regionals. Ak-Chin Southern Dunes, named a “Top 100 Golf Course You Can Play” by Golf Magazine, will be one of six Regional sites in the U.S. with each site hosting 14 collegiate teams. The top five teams from each Regional will advance to the NCAA Championships to be held in 2026 at La Costa Resort and Spa in San Diego, Calif. Exact dates for the Ak-Chin Southern Dunes Regionals will be announced at a later date, but the tournament is expected to take place in mid-to-late May 2026.