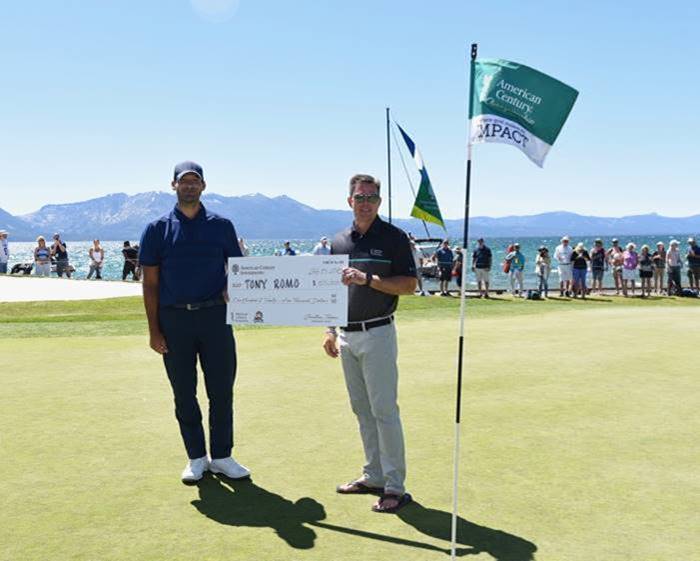 LAKE TAHOE, Nev.,  – In a collective effort reflecting America’s drive for a return from COVID-19, the American Century Championship will bring golf, celebrity and community service together for the 31st time July 8-12 on the shores of Lake Tahoe.

Stephen Curry, Aaron Rodgers, Charles Barkley and two-time defending champion Tony Romo are among 80 sports and entertainment stars planning to compete and charity fundraise for nine hours of live NBC Sports coverage over three days at Edgewood Tahoe Golf Course.  In accordance with governmental and health guidelines — and similar to major sporting events throughout the country — the American Century Championship will return as a live television event but without spectators.

All prize monies will be donated to COVID-19 relief and area non-profits as the tournament continues its longstanding commitment to charity fundraising efforts that have totaled more than $5 million over the years.

Title sponsor American Century Investments, NBC Sports and the Lake Tahoe Visitors Authority (LTVA) decided to move forward with the original July 8-12 dates. That timing coincides with the resurgent tourism industry amid America’s emergence from COVID-19 lockdowns and the availability of the top-name celebrities who have brought the tournament to prominence since its Lake Tahoe debut in 1990.

“Once our due diligence established that the tournament could be conducted safely, we were compelled to do everything possible to go forward in support of our friends in the Lake Tahoe resort community, who have hosted the event for 30 years,” stated American Century Investments CEO Jonathan Thomas.  “The American Century Championship remains a prominent brand-building event that provides a platform for us to tell a national television audience about how our firm is having a positive impact on society. Also, we’re excited to bring a live, competitive sporting event to TV viewers, something that has been deeply missed over the past few months.”

“While this 31st edition will be different than any previous tournament, this demonstrates a unique example of prominent stakeholders supporting each other and in turn, the destination and the community that absolutely loves this event,” offered Carol Chaplin, president and CEO of the LTVA. “It signals an important message of renewal for Lake Tahoe.”

“There’s a tremendous amount of challenging work to be done,” said Jon Miller, President of Programming for NBC Sports, which owns and operates the tournament. “We have our arms around the precautionary aspects because health and safety are the priorities.  As we’ve all seen, golf can be played in a responsible, socially-distanced way.”

Two-time defending champion Tony Romo, the former Dallas Cowboys’ All-Pro quarterback and NFL television analyst who has played in multiple PGA TOUR events, expressed his support for the decision.  “The event has a tremendous tradition and is critical to that beautiful resort region,” he offered. “It’ll be fun to try to win again but the sense of community and charity fundraising will be most important.”

NBC and tournament partners at Edgewood Tahoe and host hotels developed a comprehensive safety plan that includes enhanced cleaning protocols at both the course and hotels, on-course sanitation stations and restrictions on large organized dinners and evening events. Only the celebrities and essential tournament staff will be allowed on the course and all will be required to follow social distancing guidelines.

The competition is a 54-hole modified Stableford format tournament often referred to as the Super Bowl of celebrity golf. Curry, Rodgers, Romo and Barkley will be joined by a contingent of Hall of Famers led by Jerry Rice and entertainment personalities including Ray Romano, Alfonso Ribeiro and Larry the Cable Guy, among others. A total of 13 Hall of Famers and 19 active NFL, NBA and NHL players are expected.

Along with two-time defending champion Romo, there’s three-time winner Mark Mulder and two-time champion Jack Wagner, one of two players, along with Jim McMahon, to have played in all 30 celebrity championships.

Designated by Travel + Leisure “The Best Places to Travel in July,” (June 2, 2020) Tahoe South combines the distinctive appeal of two worlds: spectacular natural beauty and a modern tourism destination with an array of outdoor recreation, entertainment, nightlife and gaming. Tahoe’s timeless splendor and diversity toward health and wellness, green business practices and sustainability continue to define its inimitable personality. For information about lodging, recreation, packages, and healthy travel at Tahoe South, call 1-800-288-2463 or log onto www.TahoeSouth.com.