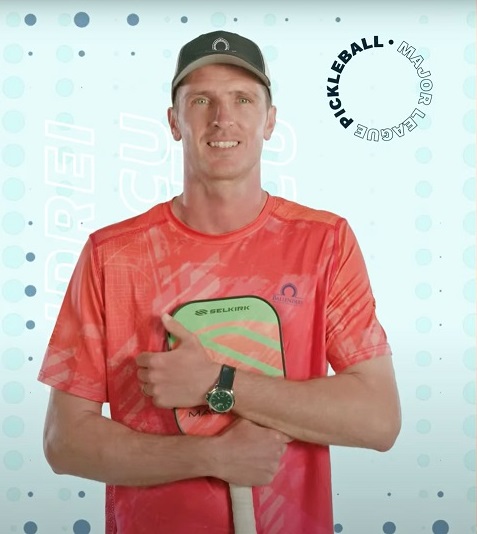 Palm Beach Gardens, Fla.  – BallenIsles Country Club Head Racquet Sports Professional Andrei Daescu was recently drafted by the Milwaukee Mashers of Major League Pickleball. Daescu, also known as “Andrei The Giant” as he stands 6’4 and is one of the most intimidating figures on the court, was drafted No. 35 overall (the 11th male selected) and is currently ranked as one of the top 10 players in the world. His Mashers contract will have him play in six Major League Pickleball events in 2023, competing in different locations throughout the country, including the March 23 – 26 event hosted in Daytona Beach. In 2021/2022, Daescu played for the Pickle Ranchers and the California Hard Eights of the Major League Pickleball tour.

The MLP Premier Level is home to the top 48 (24 men and 24 women) players in the world and the most in-demand team players in all of pro pickleball. These elite players have a winning track record on the court and a Dynamic Universal Pickleball Rating to match. Daescu’s Milwaukee Mashers co-ed team is one of 12 teams of four to represent the gold standard in the sport.

In addition to the exciting Milwaukee Mashers news, Daescu also signed a two-year contract with the Association of Pickleball Professionals (APP Tour). He will participate in 16 events in 2023, including the recently concluded Punta Gorda Open where Daescu and partner Kyle Yates won a gold medal in the Men’s Pro Doubles.

Daescu is excited about representing BallenIsles in such prestigious events for this fast-growing sport. He has been the head racquet sports professional at BallenIsles Country Club since 2017. In addition to his on-court duties, Daescu is also heavily involved with the club’s team tennis program and was also an important factor in the development of BallenIsles’ successful junior program. When not traveling, Daescu will continue to serve as the club’s Head Racquet Sports Professional.

Daescu was introduced to the game of pickleball at BallenIsles during a pro exhibition at the club in 2017. The game has grown a lot since then and Daescu has been advancing his pickleball skills as well, competing in pro tour events in 2018 and 2019. Daescu also competed in the 2021 Pickleball World Championships where he was a bronze medalist and represented Team World in the Team USA vs Team World challenge. Daescu’s professional racquet sports resume includes:

In 1964 legendary Florida developer John D. MacArthur and the PGA of America teamed up with golf course architects Dick Wilson and Joe Lee to design a championship-caliber golf facility. Over the next ten years, BallenIsles, then called PGA National Golf Club, hosted numerous major tournaments like the PGA Championship and PGA Seniors Championship and was home for the Professional Golfers’ Association of America. The Club was also the host site for the original PGA TOUR Qualifying School and held the inaugural PGA Merchandise Show. When the MacArthur/PGA of America agreement expired in 1973, the Club was renamed the JDM Country Club for John D. MacArthur. For the next 15 years, the prestigious local country club hosted many celebrities and professional golfers and staged many events on the three golf courses on the property. In 1988, the three golf courses and surrounding property were sold by the John D. and Catherine T. MacArthur Foundation and renamed BallenIsles Country Club. A multi-year and multimillion dollar plan to develop a private country club community was unveiled. Since the early 2000’s, BallenIsles Country Club has been consistently ranked as one of the Top 100 Clubs in America. For more information visit www.BallenIsles.org.