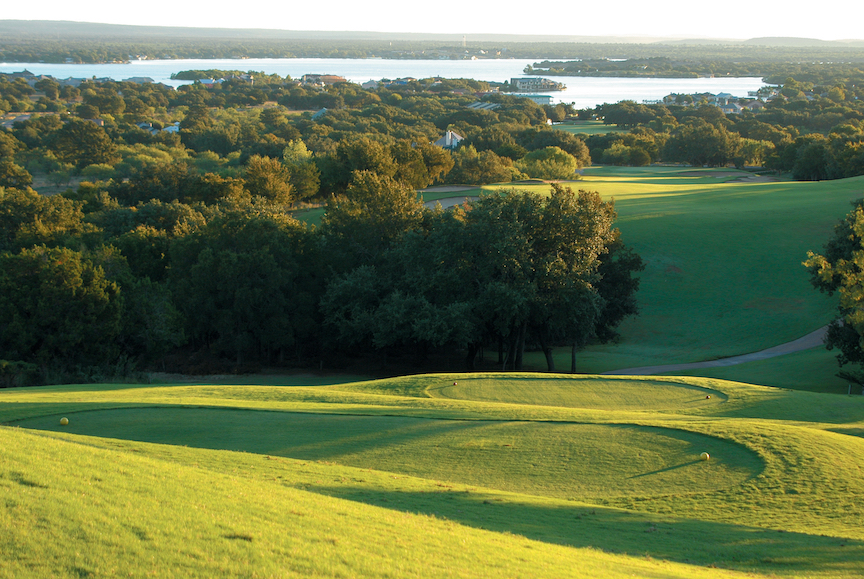 The artfully-renovated Apple Rock layout offers some of the most picturesque views in the state, most notably at the start of its second nine. The 10 th and 11th holes, both dramatic downhill par fives, cascade toward the serene coast of Lake LBJ and the par-three 12th plays along an intimate stretch of its shoreline. Jones Sr. strategically routed Apple Rock, which debuted in 1986 and was named Golf Digest’s “Best New Resort Course”, to take advantage of the many higher elevation points that overlook Horseshoe Bay and the lake.

Apple Rock’s renovations included the installation of 007 Bentgrass greens, expanding green sizes by as much as 50 percent on many holes, renovating (and scaling down many) bunkers, re-shaping and leveling tee-boxes, improved irrigation, as well as adding stone retaining walls along water hazards to improve aesthetics.

“Our members and resort guests are now enjoying improved playability and conditions on an already-exceptional design and routing,” says director of golf Anthony Holder. “Apple Rock has so many scenic Hill Country views and fits so perfectly into that hilly landscape. With these refinements and these luxurious Bentgrass greens, the course has never been more beautiful.”

In 2016, Slick Rock, the oldest of Horseshoe Bay Resort’s three Robert Trent Jones, Sr. layouts (built in 1971) underwent similar renovations and in 2017, the acclaimed and challenging Ram Rock course (which opened in 1981) was restored to match Jones’ original vision. On Ram Rock, to improve playability, the greens were enlarged and re-contoured and dozens of bunkers were reduced in size. The result is a more enjoyable course from the forward tees and still an impressively-strategic set-up for skilled golfers.

Similarly, the greens on Apple Rock’s 6,999-yard, par-72 layout have been made larger and more playable and, according to director of agronomy Ken Gorzycki, each surface now has more options for quality pin placements. “We’re excited to have this incredible, heat-tolerant and high-performing 007 Bentgrass on all four golf courses now (the Jack Nicklaus Signature course, Summit Rock was the first of Horseshoe Bay Resort’s courses to add 007 Bentgrass when it was built in 2010 and has functioned extremely well there and

on the Slick Rock and Ram Rock courses). The feedback has been tremendous and with Apple Rock’s larger, more receptive greens and greatly-improved irrigation in place, it’s going to be one of the most pleasing courses in the Texas Hill Country,” Gorzycki says.

Gorzycki’s team worked in concert with Robert Trent Jones II’s design team, led by senior project architect Mark Voss, to maintain the integrity of the original design while making the most of the layout’s naturally hilly features. “I think golfers are going to get to use their creativity more coming into and around the greens,” Voss says. “The enjoyability factor on Apple Rock is higher than ever.”

Apple Rock’s bunkers now feature a firmer, lighter-in-color sand that Holder says will be more playable while creating an attractive visual contrast against the emerald fairways. “With these improved aesthetics and the amazing natural elevation changes and the views of the Hill Country and Lake LBJ, it’s hard to imagine a better setting for golf in Texas,” he adds.

With all 54 Robert Trent Jones, Sr.-designed holes in peak condition plus the immaculately-landscaped 18-hole Whitewater Putting Course and the exclusive, private Summit Rock course, Horseshoe Bay Resort is positioned as one of the most attractive and diverse golf destinations in the United States. The brand-new, boldly-designed Cap Rock clubhouse village will open later this year with a state-of-the-art, 3,360-square-foot structure housing world-class dining, locker rooms, meeting spaces and terraces overlooking breathtaking views of the Texas Hill Country and Lake LBJ.

A finely-appointed indoor meeting pavilion and golf shop servicing the Ram Rock and Apple Rock courses are now open with a luxury swim park and Pool Pavilion scheduled to debut in August. An architectural feast for the senses, each building in this stately complex is fashionably designed in a rich stone aesthetic that is being called “Hill Country Modern” and makes incredible use of both the indoor and outdoor spaces to maximize enjoyment and the expansive vistas.

“We’re thrilled for our members and guests, and for our ownership who had the vision to make Horseshoe Bay Resort one of the most unforgettable golf destinations in the country,” says general manager Bryan Woodward. “To be on the ‘fun’ side of this $90-million-dollar resort renovation means the we’re ready for the world to see what a uniquely-rewarding and “complete” experience can be found here. Everything golf travelers are looking for is presented here in an inimitable tropically-inspired Texas Hill Country setting. There’s really nothing like it in the country.”

The initial rounds on the renovated Apple Rock course were open exclusively to members and now resort guests can reserve tee times on one of the Texas Hill Country’s most sought-after layouts. Call 877-611-0112 or visit https://www.hsbresort.com/golf/golf-packages to book your adventure at one of the most thrilling resort destinations in the Southwest.

Horseshoe Bay Resort is one of the largest golf resorts in the country and is the original Texas lakeside resort destination. It is located 45 minutes from Austin on over 7,000 picturesque acres of the Texas Hill Country and along the spectacular shores of constant-level Lake LBJ. The AAA Four Diamond resort is the only waterfront resort in Texas and is part of the Crescent Hotels & Resorts management company’s distinguished Latitudes lifestyle hotels and resorts division. It features four championship golf courses designed by World Golf Hall of Fame members Robert Trent Jones Sr, and Jack Nicklaus, as well as the exciting 18-hole natural grass Whitewater Putting Course.

Horseshoe Bay Resort has invested $90 million in a property-wide renovation and new construction. The work included new guest rooms, suites, and multi-room units, as well as renovation of the golf courses and facilities, dining experiences, meeting spaces, and more. The resort also features a world-class spa and health