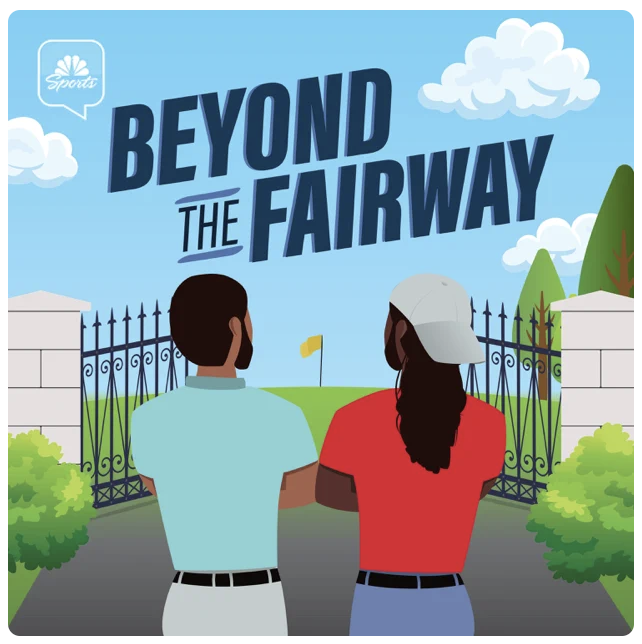 “The Intersection of Culture and the Lifestyle of Golf.”

Podcast to Examine Golf from Different Perspectives with In-Depth Interviews with Celebrities, Athletes and Golf Influencers

STAMFORD, Conn.  – NBC Sports has launched Beyond The Fairway, a new podcast hosted by professional golfers Doug Smith and Will Lowery, aimed at examining golf from different perspectives through interviews with celebrities, athletes and golf influencers and expanding the reach of the game.

Additional guests slated to appear on Beyond The Fairway in the coming weeks and months include actors Don Cheadle and Cedric The Entertainer, Arizona Cardinals WR Larry Fitzgerald, and Toronto Raptors PG Kyle Lowry.

“We want Beyond The Fairway to be the intersection of culture and the lifestyle of golf,” said Smith. “Let’s dive into why people love this game so much. Why do we do such crazy things to chase a little white ball around grass? What drives our obsession and passion for this game? And never before have two black men been opposite each other to talk golf like this. It shows how NBC Sports and GOLF Channel are actually doing something to help diversify the golf landscape.”

“We’re going to be talking golf from a different clubhouse,” said Lowery. “Beyond The Fairway is going to have a relaxed atmosphere and welcome all golfers, opening the door to the casual golfer who might not care about greens-in-regulation statistics on the PGA TOUR. We’re not afraid of going out-of-bounds with conversations – and we might not make may holes-in-one either – but you’ve got two individuals whom are from the rough to guide you through the experience.”

Lowery was a cast member on GOLF Channel’s hit reality series, “The Big Break,” and appeared on both “Big Break Indian Wells” and “Big Break NFL: Puerto Rico.” He currently competes on the SwingThought Tour and Advocates Pro Golf Tour, has several top-10 finishes and two victories on the mini-tour circuit, and advocates for minorities through production and content creation in the entertainment space.

Smith played collegiate golf at Florida A&M University and the University of Louisville, was the first African-American to play golf at Louisville and won the 2005 PGA National Minority Collegiate Championship during his time as a Cardinal.

Beyond the Fairway will be available for download on all major podcast platforms, including: NBCSports.com/podcasts, Apple Podcasts, Stitcher, Spotify, Google Podcasts, TuneIn and iHeart.

Video clips of Beyond The Fairway will be posted on GOLFChannel.com as well as the GOLF Channel YouTube page. Beyond The Fairway joins NBC Sports’ slate of podcasts spanning the NFL, the NHL, NASCAR and other motorsports, MLB, the NBA, rugby, and more.