The duo shared the lead late in the final round of the year’s 4th major championship with Retief Goosen, Jay Haas and Tim Petrovic, but Firestone bared its teeth and drew some errant tee shots from Parel and Jones coming down the stretch. The pair finished tied for fourth at two under par. Goosen, the two-time United States Open Champion, birdied the last two holes to win with a -6 total. 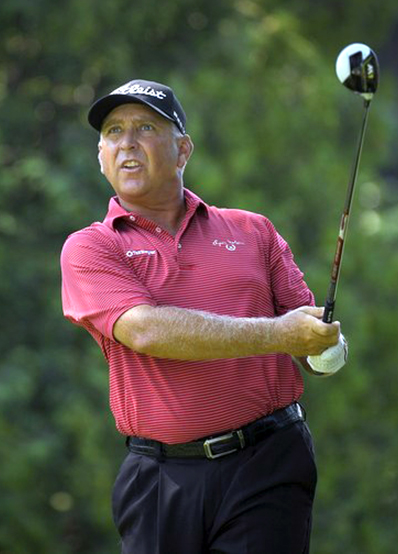 Parel’s fine showing saw him move up three spots to fourth in the season-long race for the Charles Schwab Cup. And Jones moved up six spots to 18th.

Parel and Jones both wore apparel from the Byron Nelson Collection during the competition, including branded shirts, sweaters, outerwear and pants (www.ByronNelsonGolf.com). This is Jones’ inaugural year representing the company, and Parel’s third.

“We’re thrilled with Scott and Kent’s success at Firestone and wish them every good fortune as the season moves along!” said Byron Nelson president, Bob Friedman.

One of the most enduring sporting icons in the world, Byron Nelson summons thoughts of a true gentleman, sportsman, humanitarian and champion. It is the aim of Byron Nelson USA to be faithful to that legacy by offering apparel of superior styling and uncompromising craftsmanship.