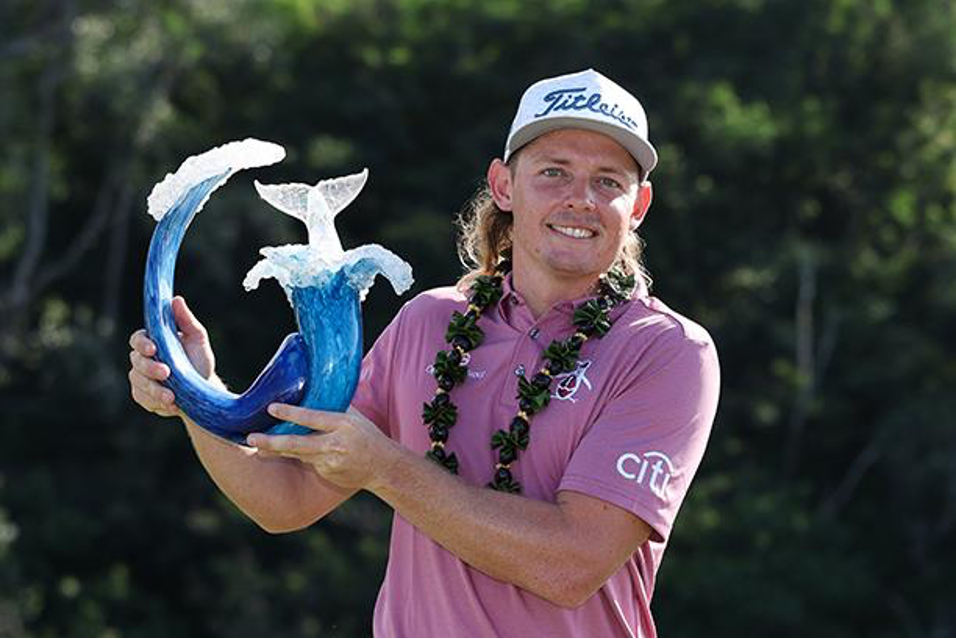 “We congratulate Cameron for winning in wire-to-wire fashion and for smashing the PGA Tour scoring record with a 34 under par total,” said Oscar Feldenkreis, President and CEO of Perry Ellis International. “With victories in back-to-back years, he has solidified himself as an international star and one who rises to the occasion when the pressure is the greatest. We are proud to have Cameron as an Original Penguin brand ambassador.”

“It was an unreal round and week and one which I will never forget,” stated Smith. “I feel like I had a really good rest and didn’t play much in the fall. It was nice to kind of see where my game’s at against some of the best players in the world. I’ve been working hard and it’s paid off early in the season.”

With the win, Smith jumps up to third in the FedExCup standings and tenth in the Official World Golf Rankings. “It took me a while to get into the top 20, so it’s really cool,” Smith said after raising the trophy at Kapalua. “That was one of my goals this year, to get into the top 10. It’s nice that that’s done and dusted. Hopefully, I can keep cruising up those world rankings.”

For the record-setting week, Cameron wore Original Penguin’s golf collection featuring its new Re-Originals sustainable fabrication. These eco-friendly polos are crafted with 30% recycled polyester and use a double-knit high-gauge fabrication for superior performance and aesthetics. Pairing these elevated materials with OPG’s modern tailored fit, Cameron delivered a winning look on and off the course.

For over 60 years Original Penguin, and its namesake icon Pete, the Penguin, has been adorned and adored by the masters of leisure and sport to define itself as an American classic.

Today, the Penguin icon still stands as a signal for those who know how to be an original and what you wear for the good times.

In 1955, Minneapolis-based Munsingwear – an underwear and military supply company – ironically became the touchstone of suburban sport with the introduction of the first iconic golf shirt to America – an ORIGINAL PENGUIN®. Known for its unique, humorous and detail-oriented clothing, Original Penguin offers a full range of men’s and children’s clothing, accessories and fragrances.  The brand continues to evolve into the sports arena with the addition of tennis and pickleball apparel.  Original Penguin is a global brand with retail stores worldwide as well as two dedicated e-commerce websites: www.originalpenguin.com andwww.originalpenguin.co.uk.

Perry Ellis International, Inc. is a leading designer, distributor, and licensor of a broad line of high quality men’s and women’s apparel, accessories, and fragrances. The company’s collection of dress and casual shirts, golf sportswear, sweaters, dress pants, casual pants and shorts, jeans wear, active wear, dresses, and men’s and women’s swimwear is available through all major levels of retail distribution. The company, through its wholly owned subsidiaries, owns a portfolio of nationally and internationally recognized brands, including: Perry Ellis®, An Original Penguin by Munsingwear®, Laundry by Shelli Segal®, Rafaella®, Cubavera®, Ben Hogan®, Savane®, Grand Slam®, John Henry®, Manhattan®, Axist® and Farah®. The company enhances its roster of brands by licensing trademarks from third parties, including: Nike® for swimwear, and Callaway®, PGA TOUR®, and Jack Nicklaus® for golf apparel.  Additional information on the company is available at www.pery.com