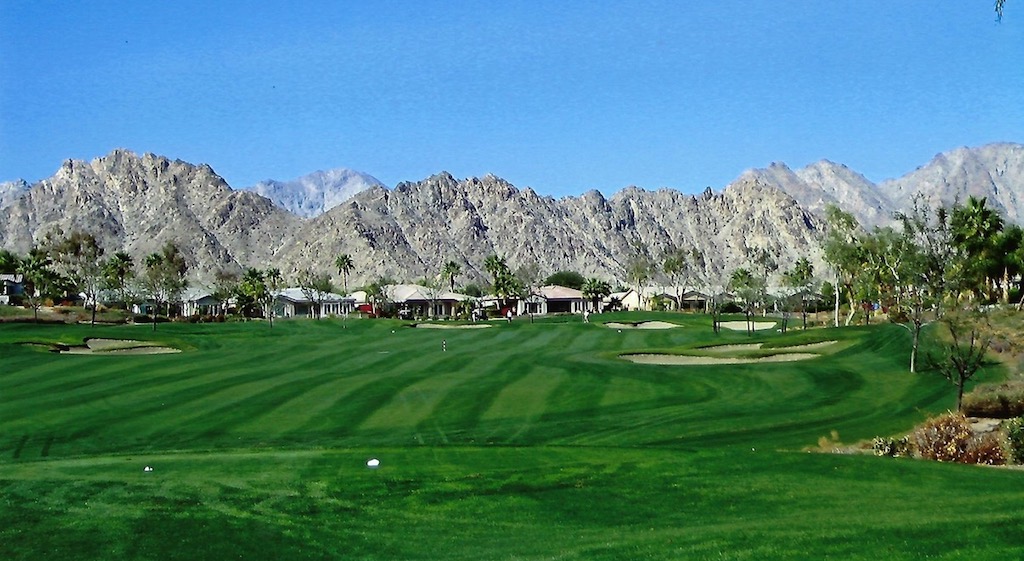 LAS VEGAS, NV – The Golf Club at La Quinta in Southern California rebranded itself as Coral Mountain Golf Club a little over a year ago. But while the name has changed, one key element has not: The championship layout, maintained by Pro Turf International, remains one of the most popular and well-conditioned layouts in Southern California, and a favorite for tournament organizers.

That is reflected by the event played at Coral Mountain in February – the Prestige college golf tournament – that included some of the top-ranked players in the country. They walked away very impressed with the layout, and especially the conditioning.

“Thank you so much for making the 2021 Prestige not only playable but a remarkable success as well,” said Dawson Ovard of Southern Methodist University. “The course was in fantastic shape and proved to be a challenge just as prior years.”

And Christian Newton of Colorado State added, “The course was in great shape and the food was awesome. What a great job the staff did with the event.”

Pro Turf International was contracted by course owner Tom Brown in 2013 to take over course maintenance, and the results have been impressive. PTI is a family-owned construction, landscape and golf maintenance company with over 30 years of hands-on experience in the Southwest.

When Brown purchased the course, it had fallen into disrepair. Within a year after bringing in PTI, the golf course was brought back to its former outstanding condition. PTI’s work was so well received that the company was later contracted by the Trilogy Homeowners Association to spruce up the landscaping between the course and the 1,200-plus homes bordering the course.

“The PTI team was pretty responsive to getting things done when needed, and making adjustments on the fly,” said Eric Angle, General Manager of the Trilogy at La Quinta Maintenance Association. “There were a lot of hands in the project – committees, the HOA and so many homeowners – and there were tense moments. But PTI responded well.”

Set at the base of the majestic Santa Rosa Mountains of La Quinta, the course opened in 2002. It has been tested by professional golfers including Tiger Woods, Phil Mickelson, Fred Couples, Adam Scott, Annika Sorenstam and Mark O’Meara, as the home of the PGA Tour Skins Game between 2003-2006.

“Gary Panks is the kind of course architect that has the ability to provide a design that is unique to the land and topography provided to him,” said Kip Wolfe of PTI. “He did just that at Coral Mountain. The course really fits the property like a glove.”

Panks provided wide and accessible landing areas throughout the golf course. Strategically positioned fairway bunkers will penalize tee shots that miss the inviting fairways, however, so players need to pay attention on the tee box.

“The larger greens help us maximize an array of pin placements,” said Wolfe. “The greens surrounds tie in nicely so that we can maintain the turf at different heights and provide the golfer different looks which presents the ability for different shot making.”

One other design feature at Coral Mountain that is often overlooked at most courses is the variety of tee boxes.

“Gary was also very good with providing multiple tee locations so there is a variety of playability,” said Golf Course Superintendent Kevin Templin. “He also designed better than average size tee surfaces which helps during heavy volume of play.”

The entire golf course, other than the greens, was grassed using Tifway 419 hybrid Bermuda. The Tifway 419 provides golfers with championship quality turf year-round.  For the winter months, the tees, fairways and green surrounds are overseeded with a two-way blend of perennial ryegrass. Poa Trivialis seed is used for greens.

Several sets of tee boxes, including the Skins tees that play at nearly 7,200 yards, provide a length that is just right for your golf game. Dramatic water features and sand perils complement the golf course fairways, leading to the rolling greens. The natural California desert landscape of the surrounding Coachella Valley creates a boundary of play both beautiful and daunting.

The Trilogy at La Quinta 55 + community consists of 1,238 homes that make up the development in around the golf course.  The residents are very active within the community. There are numerous amenities for the seasonal or year-round residents.  The golf course provides for year-round men’s and women’s leagues.

“We continue to work on providing the optimum tournament-style playing conditions,” said Wolfe. “We recently made significant changes with the Toro irrigation system and software program. Pro Turf also was contracted by the Trilogy at La Quinta HOA to completely renovate the perimeter landscape areas around the golf course. This project provided for overall better aesthetics, drought-tolerant plants with less water use and maintenance.”

“PTI has done a fabulous job getting the property in a shape where we set ourselves apart,” said Coral Mountain General Manager Jim Wanless. “Kevin Templin and his staff continue for perfection on a daily basis.  With his leadership and with our Golf Professional, Angel Martinez, we believe we can host other major tournaments.”

ABOUT THE CORAL MOUNTAIN GOLF CLUB

Set at the base of the majestic Santa Rosa Mountains of La Quinta, CA, this 18-hole championship Southern California golf course is a Gary Panks design that insures challenge and reward for players of all skill levels. The course has been tested by professional golfers including Tiger Woods, Phil Mickelson, Fred Couples, Adam Scott, Annika Sorenstam and Mark O’Meara, as the home of the 2003-2006 PGA Tour SKINS GAME events. The course features wide fairways and large, rolling greens.

Trilogy at La Quinta brings luxurious Shea Homes active adult living to the heart of the Coachella Valley. This community is revered for its finely crafted upscale homes and world-class amenities that include two amenity centers, an 18-hole golf course, full-service spa and the award-winning Bistro 60 restaurant.

Pro Turf International is a family-owned construction, landscape and golf maintenance company with over 30 years of hands-on experience in the Southwest. They proudly serve the golf, sports and landscape industry to enhance quality and improve conditions in a safe, environmentally friendly manner. For more information call (702) 315-5121, or visit www.ptigolf.com.