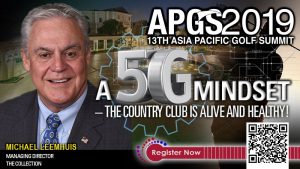 If you think that the country-club lifestyle is sinking to its knees and waiting to die, think again!

Against a backdrop of mind-numbing changes, the need to re-think and re-position a country club takes on a whole new meaning. While change brings with it disruption, this is a development that should be looked upon as an ideal opportunity to revitalise and breathe new life into country clubs.

This is something that is close and dear to the heart of one man who is perhaps the grand daddy of country clubs. He has managed some of the world’s best and he now heads up a business organisation called “The Collection”.

The man is Michael Leemhuis, one of the most respected and decorated managers in the global club industry. He was the President of the Club Managers Association of America (CMAA), President of the prestigious Ocean Reef Club; CEO of Congressional Country Club and was responsible for guiding Congressional Country Club to the #1 spot in the Platinum Clubs of America and into the top 100 of Platinum Clubs in the World.

There is perhaps no one better qualified to talk about the future of country clubs in the 21st Century and Leemhuis has accepted the invitation to speak at the 2019 Asia Pacific Golf Summit. He is a great proponent of there being an exciting future ahead so long as radical changes are made on how clubs are operated and managed to revitalise the club industry.

“In a market environment made up of multi generations, we cannot just make tweaks for the sake of change – we need to re-invent to be relevant to everyone and this is possible. All of us need to embrace a new mindset – the days for the country club lifestyle are not done and dusted,” stressed Leemhuis.

Leemhuis does not preach – he practises what he believes in and therefore he is the Managing Director of “The Collection”. This organisation has been formed to operate high-end, exclusive private clubs to the standards of America’s finest golf courses and clubs. Their members are or have been on the rosters of some of the most distinguished clubs in North America and expect only the very best conditions and club experience.

Leemhuis is one of some twenty world-class speakers who have been booked to speak at APGS 2019.

The Summit will be staged on November 4 – 6 in the futuristic Indian city of Gurugram and the venue will be the multi-award winning DLF Golf and Country Club.

Delegate registration to the 2019 Asia Pacific Golf Summit is now open at :

Scan the QR code to download the APGS app now to receive the latest news.

APGS is owned and organised by the Asia Pacific Golf Group.