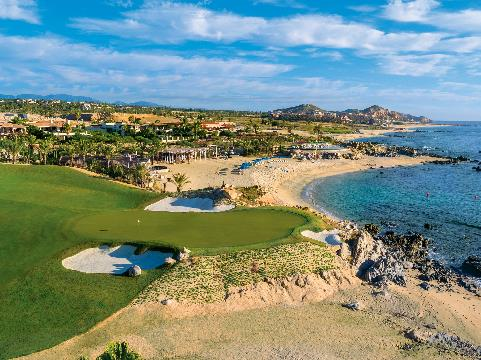 Los Cabos, Mexico – Credited with putting Los Cabos on the international golf map when it opened in 1994, the Ocean Course at Cabo del Sol, renamed the Cove Club, reopened last month with a handful of new holes, upgraded playing surfaces, restyled bunkers, new landscaping and a trio of comfort stations.

Currently open to unaccompanied play, the Cove Club occupies what Jack Nicklaus once described as “the best golf property I’ve ever seen.” Stretched across a stunning desert landscape framed by mountains and touched by the sea, the layout, often described as the ‘Pebble Beach of the Baja,’ is both an aesthetic triumph and a superb test of golf. One of the top-rated courses on Nicklaus’ extensive resume, the layout, centerpiece of a 1,800-acre master-planned community, has been a fixture on most “Top 100” lists since its debut.

Nicklaus worked closely with the Cabo del Sol team to accommodate their requests to make routing changes to the course to maximize the site’s real estate potential.

“We were given the challenge to redesign the golf course to meet their needs, but at the same time maintain the global status the Ocean Course has enjoyed for over 25 years,” Nicklaus said. “The developers needed to take a couple of holes off the ocean, and my responsibility was to preserve the quality of the golf course. I think we have done that in a very satisfactory way. We still have great ocean views, and we still have four holes on the ocean.” These holes trace a rugged coastline marked by granite outcrops and golden beaches lapped by the Sea of Cortes. Nearly 80,000 plants, trees and shrubs, ranging from bougainvillea and coco palms to palo blanco and purple lantana, have been planted to beautify the layout.

Strategic nuances have been introduced and overall playability enhanced on the refurbished course. For example, the new Rooster Fish (kids) tees total 4,451 yards and invite family-friendly outings. In addition to full-service comfort stations on both nines, an Airstream trailer parked on the beach behind the fifth green offers Mexican specialties and ice-cold refreshments.

Among the new holes crafted by Nicklaus is the short par-3 seventh, which was tucked into recreated dunes a stone’s throw from the beach. Faced into the prevailing breeze, this oceanfront hole offers two different angles of attack from a wishbone-like set of tees. The target is a raised green defended front and back by deep bunkers with rolled-down grass faces. As is true throughout the remodeled layout, these new-look bunkers are filled with bright white sand that provides a strong visual contrast to the emerald green turf and turquoise-blue sea.

To make way for a new entryway to the resort community, a new par-4 ninth hole was built in a corridor adjacent to the previous ninth hole. The new creation, robust at 461 yards from the tips, mimics the original with its broad saddled fairway but has more dramatic flair in its fairway and greenside bunkering.

At the west end of the course is the Cove Club, a luxury residential community currently under development. With the old 17th hole converted to a beach club, Nicklaus designed a new ridge-to-ridge par-3 17th hole, which drops from a set of elevated tees to a well-defended green backdropped by the sea.

The previous 16th hole, a stirring downhill par 4 that plunges 100 feet down the side of a mountain, has been recast as the 18th hole. “We moved the green a little closer to the ocean and dropped it down to create a spectacular finishing hole,” Nicklaus stated. The peninsula-style green, guarded to the left by an unusual U-shaped bunker with a view portal to the sea, clings to a cliff and appears to float on the ocean. Stretching to 455 yards from the Cove tees, the revised 18th hole immediately takes its place among the finest finishing holes in Los Cabos.

The Cove Club will close for additional modifications at a future date and will reopen as a private club. The Tom Weiskopf-designed Desert Course at Cabo del Sol, also slated to undergo future design changes, will remain a public-access resort venue.

Construction has begun on Park Hyatt Los Cabos, a 162-room resort hotel with 35 private residences set above the seaside sixth hole; and Four Seasons Resort and Residences Cabo San Lucas at Cabo del Sol, an 80-key resort with 40 private residences situated within the Cove Club’s beachfront community. A 2022 opening is forecast for both properties.

To inquire about Cove Club tee time reservations, call the golf shop at 866-231-4677; or email requests to coveclubreservations@cabodelsol.com.