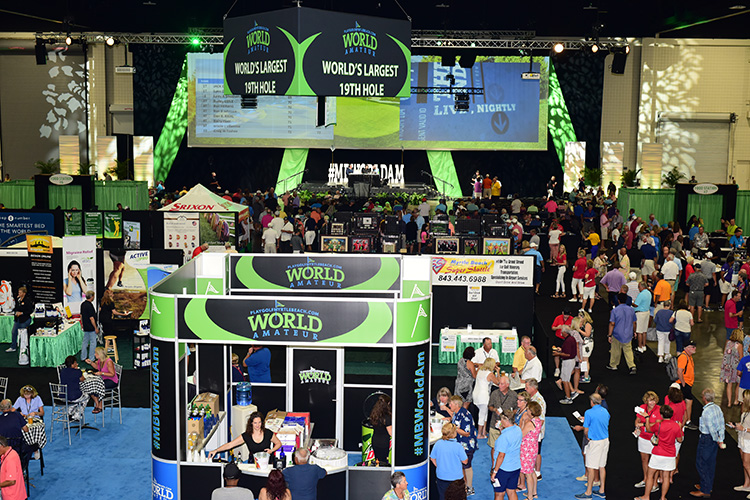 MYRTLE BEACH, S.C. — The PlayGolfMyrtleBeach.com World Amateur Handicap Championship has partnered with Crown Royal to host a Purple Bag Project event at this year’s tournament, which will be played Aug. 26-30.

Crown Royal launched the Purple Bag Project in 2010, filling the famed whiskey’s signature purple bags with non-perishable items and sending them to deployed members of the United States military as a sign of gratitude for their sacrifice.

The 36th annual World Am will have 3,226 players and each will have the opportunity to fill a bag at the Crown Royal Purple Bag Project booth at the World’s Largest 19th Hole.

Golfers will also be encouraged to write a postcard of support to troops. The postcards will be posted on the walls of the Crown Royal booth at the 19th Hole before being mailed to troops at the conclusion of the tournament.

“The PlayGolfMyrtleBeach.com World Amateur Handicap Championship is all about having a good time – on and off the course,” tournament director Scott Tomasello said. “The good times we will all be enjoying are made possible by the men and women who risk their lives to defend our freedom, so we are honored to have the tournament be part of Crown Royal’s Purple Bag Project.”

“Crown Royal believes it’s not what you have, it’s what you give,” said Ashley Roberts, Manager On Premise Business Development United Division Break Thru Beverage. “So, when it came to honoring America’s service men and women, we wanted to do more than simply raise a glass. We created The Purple Bag Project, writing notes of gratitude, packing and sending care packages to the most generous amongst us, our soldiers.

“We are thrilled to bring this activation to the 19th Hole. Attendees will be given the opportunity to write a note of gratitude, donate goods to care packages and pack the iconic Crown Royal bag full of care to send overseas to our soldiers.”

The World Am, which attracts players from all 50 states and more than 20 countries, will be played on 60 of Myrtle Beach’s best courses.

Among the big names that have appeared at the 19th Hole in recent years are David Feherty, Brandel Chamblee, Charlie Rymer, Damon Hack, Ewa Mataya Laurance and John Daly.

Players will also receive a gift bag that includes a Chase 54 polo, a pullover, a logo’d hat, a PGA Tour Superstore gift card and an assortment of other goodies.