Curry, three-time NBA champion and iconic three-point shooter, is the first NBA player to make the cover of GOLF 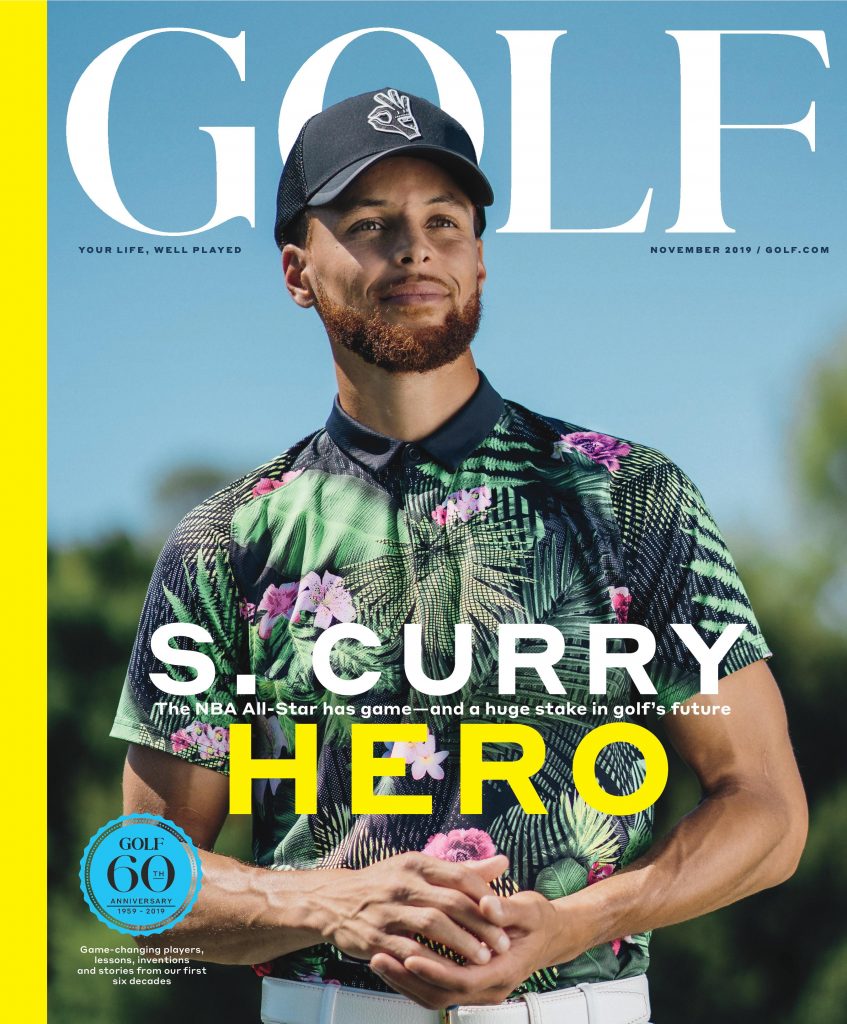 Few modern-day professional athletes have transcended their sport the way the Golden State Warriors’ legendary point guard has. While most fans are aware of Curry’s impact on the game of basketball and his relentless dedication to improving his skills on the court, fewer know of his unyielding passion for the other sport he grew up playing: golf.

Over the last few years, Curry—who played competitively on his high school’s golf team—has diligently given back the game that has had such a big influence on his life. Earlier this year, when Curry learned that a Howard University student had been working to try to resurrect their golf program, Curry pledged to fund the men’s and women’s programs for their first six years. If that wasn’t enough, he is also helping to hire coaches and design team uniforms at the historically black university. Acts like these, along with Curry’s commitment to such worthy programs as the PGA Jr. League and PGA REACH, make Curry one of the most prominent ambassadors for the modern game of golf – in the words of GOLF Magazine… a hero.

“It’s been 10 years since we last had a non-golf personality on the cover of GOLF,” David DeNunzio, Editor-In-Chief of GOLF, said. “It’s extremely rare that someone the caliber of Steph Curry, known for his greatness in an area other than golf, actually moves the needle in our game. He is such a great ambassador for the sport of golf, and we’re thrilled to feature him on our 60th anniversary cover.”

Curry’s love of golf was passed on from his dad, former NBA standout Dell Curry. The younger Curry readily acknowledges that the lessons he learned on the course as a child, about accountability and integrity, serve as the foundation for his success as a basketball player.

Golf also provides “the sense of normalcy in terms of doing things outside of basketball that can take your mind off the game for a little bit,” Curry relates in GOLF’s November cover story.

“When you’re playing [NBA games] nine months out of the year, every other night, it takes a toll,” Curry adds. “And so just to be able to go out and get some sunlight, have fun, play a game, still be competitive, still kinda keep that mental sharpness, but get to enjoy golf – it’s crazy.”

The November issue of GOLF magazine will hit subscriber’s mailboxes and newsstands the week of October 15, 2019.

Stephen Curry dishes on swing thoughts, what playing with the pros is REALLY like

The six time NBA All-Star sits with GOLF Senior Writer Alan Shipnuck to discuss his love for golf, hosting his own charity event, and his generous gift to Howard University.

Stephen Curry on golf’s importance and the difference between good and great:

This week’s episode of the GOLF podcast Drop Zone features a discussion between Stephen Curry and Alan Shipnuck. Curry and Shipnuck talk about Steph’s reviving the Howard University golf program, his pro golf aspirations, and the role golf played in the Warriors’ success. Afterward. Shipnuck joins the show to talk about what it’s like to play and hang out with Curry, and what kind of high-reaching prospects are in his golf future.

About GOLF Magazine and GOLF.com

Celebrating its 60th anniversary in 2019, GOLF – including GOLF Magazine, GOLF.com, , and associated digital, video and social media platforms – is the premier media brand for all-things golf. GOLF Magazine reaches an audience of 4.2 million people, while more than 6 million people engage with the brand across our GOLF.com and GOLF social channels. GOLF’s celebrated franchise includes the GOLF Top 100 Courses (including World and U.S. editions); GOLF’s Top 100 Courses You Can Play; GOLF’s Top 100 Resorts; GOLF’s Top 100 Teachers in America; the GOLF Fix Finder app; and GOLF Films productions. With innovative content covering equipment, instruction, travel and lifestyle, GOLF is the definitive voice of the sport on and off the course, dedicated to enhancing every golfer’s enjoyment of the game.

GOLF Magazine and GOLF.com are part of the 8AM Golf family. 8AM Golf was created by golf entrepreneur and GOLF publisher Howard Milstein as the holding company that oversees his golf companies—all of which are dedicated to helping golfers at every level enjoy the game more. In addition to GOLF and GOLF.com, other 8AM Golf companies include the Nicklaus Companies (in partnership with Jack Nicklaus); legendary club maker Miura Golf; True Spec Golf, a brand-agnostic club-fitting company that has fit more than 30,000 golfers worldwide; GolfLogix, the most-downloaded GPS app in golf; and Club Conex, a global leader in the design and manufacturing of adjustable golf club adapter systems.