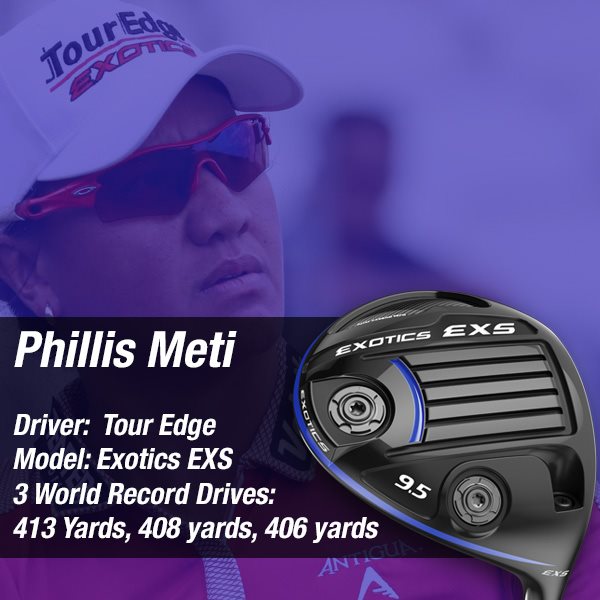 Phillis Meti Loans Exotics EXS Driver to Opponent whose Luggage was Lost, Only to Lose by Two Yards to Her Own Driver in the Finals

The No. 1 ranked women’s World Long Driver Phillis Meti entered the Tennessee Big Shots event on fire. She had won three of four live events held on the Golf Channel so far this season.

She then put up a near-perfect semi-final round in Tennessee Monday night with six of eight balls in the grid and an unbeatable longest drive of 346 yards with her Tour Edge Exotics EXS Driver.

Meti moved into her fifth finals of the year as the perennial favorite and posted a 326-yard drive in the first round of the finals.

Her opponent in the finals was flying to the event from Milwaukee on Sunday, but got stuck in Charlotte. She hitched a ride from a Golf Channel employee who went through the same delay and got to her hotel on Monday morning at 4 a.m.

Using a borrowed Exotics EXS driver from Meti and competing on four hours sleep, the eventual winner beat the three-time world champion in the finals, when her next-to-last swing produced a drive of 328 yards with the very same driver Meti had won three events with this year.

In the previous event’s finals in Rochester, Meti had beaten her by two feet and seemed to be actually cheering for her opponent’s ball as it approached her yardage line on the Golf Channel telecast.

“This is such a good story,” said Meti. “She had no clubs and no clothes. We all pitched in and she bloody won with one of mine. The Long Drive family is something else. We rallied this morning for her and I am glad it worked out for her.”

The all Exotics EXS Driver finals led to the 4th WLD victory this year for the $299 driver.

“It felt really good to finally have a roll that went my way,” said the Tennessee Big Shots winner.

Meti uses a 7.5 degree 47” Exotics EXS Driver with a Reve Revolver X shaft. The EXS Driver comes in a 9.5 degree loft designation, but it features an adjustable hosel that Meti has dialed into a 7.5 degree wind-defying, distance machine.

In the first event of the 2019 WLD season, Meti won the Ak-Chin Smash in the Sun in Arizona with two world record drives in a row of 408 and 413 yards.

She then was a runner-up at the Ft. Jackson military based event in South Carolina, before winning the next two events in Atlantic City and Rochester.

The three longest drives in the history of the women’s long drive have now been set by Meti and Exotics drivers. On her 413 yarder, she recorded a 127 MPH club head speed and a 182 MPH ball speed with a 117 foot height apex.

“The EXS driver is a $299 driver that has now won numerous awards and that has been put into play on the PGA Tours, but this takes the cake,” said Tour Edge President and Master Club Designer David Glod. “For Phillis to hit 408 and 413 and produce those kinds of ball speed numbers means that she is an extremely great long driver and that the EXS is the perfect fit and the perfect driver for her quest to become the world’s greatest.”

Meti has won the World title three times, finished 2nd twice and finished third once in the six Worlds’ she has competed in since winning in 2006.

In 1986, David Glod founded Tour Edge with a focus on offering golfers with high quality and technologically advanced golf products that were as cutting edge as they were affordable. He is now considered one of the preeminent master club designers in golf club design and has led Tour Edge to be a Top 10 manufacturer in every club category.

Tour Edge products have been put in play on the PGA TOUR, PGA Tour Champions, LPGA Tour and Web.com Tour, as well as European professional tours, and have been in play in every PGA TOUR major championship and in Ryder Cup competitions.

This has led Tour Edge equipment to 22 wins on the PGA Tours (10 PGA TOUR, 11 PGA Tour Champions and one Web.com Tour victories.)

• Exotics products bring futuristic technologies to the marketplace with tour preferred designs and smaller production runs. Exotics clubs utilize higher-grade, avant-garde materials and manufacturing methods that have established Exotics as a leader in quality craftsmanship and to redefine what is possible in golf club performance.

• Hot Launch has forged a name for itself as a producer of high-quality premium game improvement golf clubs from driver to wedge. Hot Launch has proven to provide the greatest custom fit value in golf and includes an unprecedented guaranteed 48-hour custom fit delivery program.

• Bazooka represents Tour Edge’s Get In The Game products and the absolute best value available in golf, offering advancing players, beginners, women and juniors the best in playability and affordability.

All Exotics and Hot Launch clubs are hand built in the United States in Batavia, Illinois and then distributed throughout the world.

Every Tour Edge club comes with a Lifetime Warranty and a 30-day play guarantee.