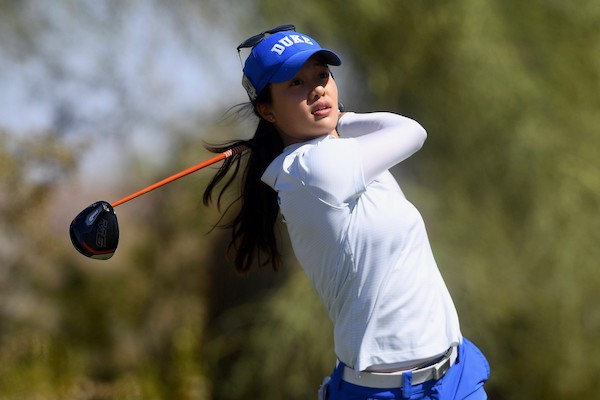 LOS ALTOS, Calif.,  – Four-time All-American and recent Duke graduate Jaravee Boonchant has been awarded the 2021 Juli Inkster Senior Award presented by Workday, recognizing the highest ranked women’s Division I collegiate golfer in her final year of eligibility for the 2020-21 season.

The award is named after Inkster, a World Golf Hall-of-Fame member and Ladies Professional Golf Association (LPGA) legend who was a three-time All-American at San Jose State (1979-82). She elected not to turn professional until after receiving her college degree, winning 17 individual titles during her college career.

As a result of winning the 2021 Juli Inkster Senior Award, Boonchant will receive an exemption to compete in the 2021 Cambia Portland Classic, taking place at The Oregon Golf Club in West Linn, Ore, Sept. 16-19. She also will automatically advance to the second stage of LPGA Q-School, Oct. 18-24 at Plantation Golf and Country Club in Venice, Fla., and will join Inkster on a two-day mentorship retreat in Northern California.

As a presenting sponsor of the Juli Inkster Senior Award, Workday will provide $50,000 to help set Boonchant up for success. The $50,000 will support Boonchant’s mentorship retreat with Inkster and assist with Boonchant’s travel expenses as she kicks off her professional golf career.

“Jaravee had an amazing college career at Duke and stuck it out through the challenges of the global pandemic to earn her college degree at one of the most respected higher education institutions in the country. That says a lot about not only her performance on the course but also about her goals and passions away from it,” said Inkster. “I look forward to mentoring Jaravee as she navigates the next stage in her professional and personal journeys.

“I also want to thank the Women’s Golf Coaches Association and Workday for partnering with me on this award,” continued Inkster. “To have a player be honored for her commitment to her school, coaches and her teammates is what this award is all about.”

“Juli Inkster is one of my role models in golf,” said Boonchant. “Her Hall of Fame career speaks for itself. Since I started playing golf, I have strived to win at every level I have competed in. To receive this award from someone like Juli is truly an honor. I’m excited to have Juli as a mentor at the beginning of my professional career and I am really looking forward to spending a couple of days with her. This award is so special for me and for all women’s collegiate golfers. Thank you Workday and Juli for making this possible and giving us the opportunity to chase after our dreams.”

“I was very excited to hear that Jaravee had won the Juli Inkster Senior Award,” said Dan Brooks, women’s golf coach at Duke University. “This award is the most prestigious and meaningful of all, for the female collegiate golfer. It wraps many attributes into one all-encompassing recognition. The winner has displayed incredible talent, maturity, perspective on life, perseverance, leadership (by example), and commitment beyond self. Jaravee represents all these traits. Her commitment to all her collegiate aspirations, and to our team, has been exemplary. I know I speak for all of Duke University when I share how proud we are that Jaravee plowed through the challenges of COVID, gained her degree with very high marks, and led us to an NCAA Championship and Semi-final finish – while producing the third lowest scoring average in our team’s history.

“I was thrilled when Juli started this award,” continued Brooks. “Juli Inkster won 17 times in college, completed her degree, and dominated on tour. There should have always been an award that honored this incredible role model. Finally, thanks to Juli herself, the award exists. Hats off to Workday for supporting such an important honor.”

Boonchant graduated from Duke in April with a degree in Statistics. A three-time All-ACC and four-time All-American selection, she accumulated a 71.99 stroke average over four seasons, the third-best career stroke average in Duke history. Her 54 even-or-under-par rounds ranks tied for fifth all-time at Duke. She also helped lead Duke to ACC Championships in 2018 and 2021, as well as the 2019 NCAA Women’s Golf Team National Championship.

The 14th-ranked player in the country on Golfstat and 13th ranking player on the Golfweek rankings as of the end of the 2020-21 college golf season, Boonchant currently resides in Orlando, Fla., and is preparing for the Cambia Portland Classic, followed by Stage II of LPGA Q-School.

The 2021 recipients of the Division II and Division III Juli Inkster Senior Award will be announced at a later date.

About the Juli Inkster Senior Award presented by Workday

The Juli Inkster Senior Award presented by Workday shines a light on an NCAA Division I senior who commits a full college career to her team in a climate where leaving school early to turn professional has become more enticing for the game’s top college players. Workday, a presenting sponsor, is proud to support the next generation of women athletes going above and beyond in their sport and communities. The award is administered by the Women’s Golf Coaches Association and managed by Outlyr, a global sports marketing and event management company. Furman senior Natalie Srinivasan was the inaugural Juli Inkster Senior Award Division I winner (2020).