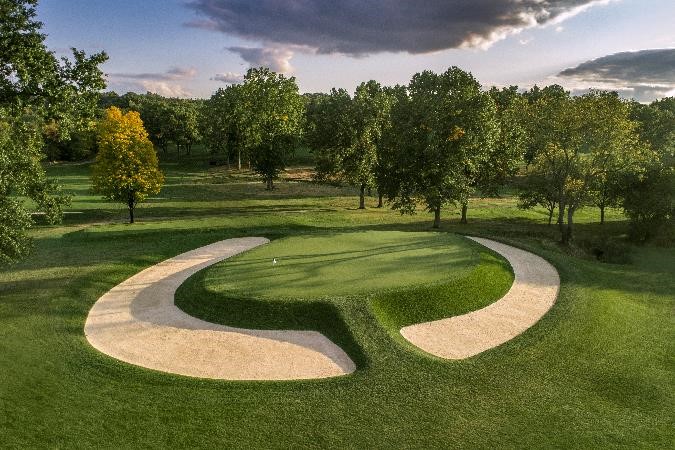 Pittsburgh, Pa.  – The renovation of Fox Chapel Golf Club’s historic Seth Raynor layout is complete. One of only a few Raynor courses in the world, it had undergone numerous changes—both natural and manmade—in its near century of existence.

In 2014, Fazio Design was asked to help the club prepare a long-range masterplan that started with new sand in the bunkers and evolved into a total reimagining by the Fazio team, led by Senior Design Associate Tom Marzolf. The membership knew that they had an “undiscovered gem,” as Tom Watson described it in 2013, but this project enabled the club to restore a number of revered Raynor template holes, highlighting the historical significance of the layout.

The club located outside of Pittsburgh, Pa., was founded in 1923 and the golf course opened in June 1925.

“We are extremely pleased to have restored Raynor’s original vision for golf at Fox Chapel,” said Robert M. Marsh, President. “Not only is this significant for fans of Seth Raynor, but it is wonderful for fans of golf at all skill levels, which was important to us throughout the process. Furthermore, this investment caps several years of investment in our club, which positions us very well for the next hundred years.”

The golf course is now open, with, in Marzolf’s words, “the strictest adherence to Raynor principles possible. It is not an interpretation, it’s truly putting Raynor back on the ground.  Seth Raynor is once and forever the architect of Fox Chapel.”

Additional information about the renovation:

Background: Seth Raynor, who died prematurely in 1926 at age 51, is known to have designed or worked on some 50 courses (plus others that were never built). Many no longer exist, while some have been substantially redesigned, were created in association with C.B. Macdonald or featured only a limited amount of his input. Raynor adopted Macdonald’s preference for “template” holes (often outdoing his mentor in the process) and favored geometric shapes when constructing greens, bunkers, and fairways. While his unique style has long been praised, many of the courses that remain have been ravaged by time, with the Raynor personality erased by generations of weather, play, and unenlightened green committees. A number of Raynor courses have undergone loving restorations of late, but none with the strict adherence to his original plans and concepts like Fox Chapel.

Modernizing: To accommodate new equipment, the course was “modernized,” moving Raynor’s features into play where golfers—of all skill levels—now hit the ball. Moving and reshaping bunkers also meant eliminating evidence of where old bunkers had been, as well as changing mowing lines. Furthermore, new tees have been added long and short to make the course playable and enjoyable for all.

“We are thrilled with the restoration of our Seth Raynor course along with the dedication by our golf course architect, construction team, club management, and our golf course superintendent and his staff, as well as the overwhelming support by our membership,” said Thomas B Reading, Chairman, Committee of the Green.

This is the latest in a series of investments made to Fox Chapel Golf Club. Two new casual dining venues have been added and the iconic Grill Room renovated. New facilities include a fitness center with two locker rooms, massage room, and ladies’ locker room. Other improvements include a new cart staging area, expanded putting green, new employee facilities, administrative offices, and a parking lot and atrium roof. The main kitchen, pool snack stand, pool locker rooms, and tennis courts were all updated. The club will celebrate its Centennial in 2023.

For additional information, access the club’s web site at www.foxchapelgolfclub.org.

Fox Chapel Golf Club is Pittsburgh’s premier family club and one of the finest traditional private, non-equity golf and country club in the nation. The Seth Raynor 18-hole golf course is consistently ranked among the Top 100 Classic Courses in the country.  Among the club’s stellar amenities are a swimming complex, tennis courts, and shooting lodge. What sets Fox Chapel Golf Club apart is its focus on family. While rich in tradition, Fox Chapel has not only recognized but embraced the fact that a truly elite club must serve the diverse needs of its member families. In addition, the historic Brandon Smith and Alden/Harlow Clubhouse is a registered architectural landmark.