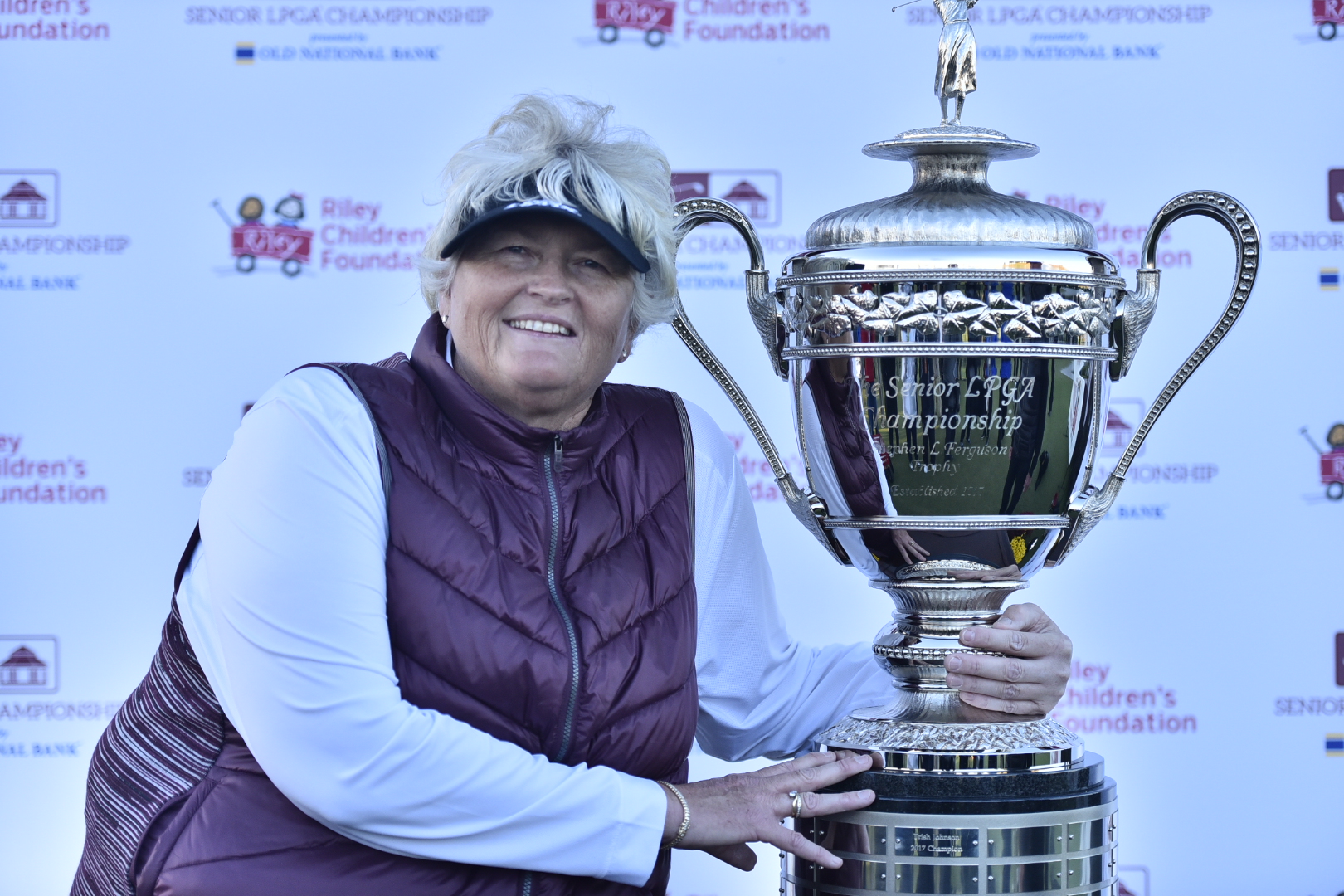 The field of 78 players include, members of the World Golf Hall of Fame, Major Champions, and past LPGA stars over the age of 45 who will compete in the 54-hole Major Championship for a total purse of $600,000. 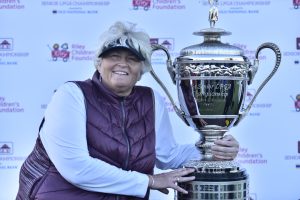 Dame Laura Davies (class of 2015) who won four major titles – the 1987 U.S. Women’s Open, the 1994 and 1996 McDonald’s LPGA Championship and the 1996 du Maurier Classic – will return to defend her Senior LPGA Championship title. Davies has also notched 86 professional wins around the world, including 20 on the LPGA Tour and 45 on the Ladies European Tour.

The event will also be televised live on Golf Channel each of the three days. See schedule below:

Juli Inkster (WGHOF Class of 2000) will return to the Senior LPGA Championship following her debut in 2018. Inkster, the 2019 Solheim Cup Captain, became the first LPGA rookie to win two major championships in one season – the 1984 Nabisco Dinah Shore and the du Maurier Classic. Inkster is a 31-time LPGA Tour winner and seven-time major champion and is one of seven golfers to have completed the Career Grand Slam. She is also a nine-time member of the U.S. Solheim Cup Team, and the captain of the victorious 2015 and 2017 teams; she is set to captain a record-setting third time in 2019.

Hollis Stacy (WGHOF Class of 2012) gained golf stardom at an early age when she captured the 1970, 1971 and 1972 U.S. Girls’ Junior titles, a consecutive-wins streak that still stands. Her professional career was just as potent, as she counts the 1977, 1978 and 1984 U.S. Women’s Opens and the 1983 du Maurier Classic among her 18 career LPGA wins. Stacy has also been named as the 2019 Inductee to the Legends Tour Hall of Fame that is housed in the West Baden Springs Hotel. She will be honored at the Friday night Pro-Am Pairings party.

Liselotte Neumann (1988 U.S. Women’s Open, 1994 British Women’s Open) won 33 professional events with 13 coming on the LPGA Tour. Neumann became a member of the LPGA Tour in 1988 after she qualified by tying for fourth at the LPGA Final Qualifying Tournament in late 1987. She won that year’s U.S. Women’s Open and was declared Rookie of the Year. Neumann also won the Women’s British Open in 1994, when it was recognized as a major championship by the Ladies European Tour, but not by the LPGA Tour.

Karen Stupples (2004 British Women’s Open) was one year too young to qualify for the 45-and-over age limit when the Senior LPGA Championship was first held at French Lick in 2017. She did, however, attend the event in her role as a Golf Channel analyst. The second edition of the Senior LPGA Championship took place in mid-October 2018 when Stupples was in the Republic of Korea covering the LPGA Tour’s LPGA KEB Hana Bank Championship.

But this year is a different matter.

“Jack Graham, my boss at Golf Channel, asked me if I wanted to work the Senior LPGA Championship again and I said, ‘Actually, I’d really like to play in it.’ So, this is my opportunity to give it a go, to step out there and try and put my best foot forward and see where it puts me,” Stupples, the 2004 Women’s British Open champion, told LPGA.com.

The history of women’s golf at French Lick dates back to 1957 where Louise Suggs captured the French Lick Women’s Open on the historic Donald Ross course. A few years later the LPGA Championship was also brought to the historic site. In 1959 Betsy Rawls won the LPGA major followed by the legendary Mickey Wright winning the title in 1960 also held on the Ross course. In 2013 the resort hosted The Legends Championship on the Pete Dye course and opened up the LPGA Legends Hall of Fame. In 2017 the resort added this new chapter with these elite and historic players.

The weeklong celebration of women’s golf will begin the weekend prior with a pro-am event on Saturday September 12 on the Pete Dye Course. For more information on playing in the pro-am with an LPGA legend, sponsorship, volunteer or other information contact Dave Harner at 812.639.6857 or via email at dharner@frenchlick.com.

The LPGA is the world’s leading professional golf organization for women. Founded in 1950 and headquartered in Daytona Beach, Fla., the association celebrates a diverse and storied membership with more than 2,300 members representing more than 30 countries. With a vision to inspire, empower, educate and entertain by showcasing the very best of women’s golf, LPGA Tour Professionals compete across the globe, while the Symetra Tour, the official development and qualifying tour of the LPGA, consistently produces a pipeline of talent ready for the world stage. Additionally, LPGA Teaching and Club Professionals directly impact the game through teaching, coaching and management.

The LPGA demonstrates its dedication to the development of the game through The LPGA Foundation. Since 1991, this charitable organization has been committed to empowering and supporting girls and women through developmental and humanitarian golf initiatives, such as LPGA*USGA Girls Golf.

Follow the LPGA on its television home, Golf Channel, and on the web via www.LPGA.com. Join the social conversation at www.facebook.com/lpga, www.twitter.com/lpga and youtube.com/lpgavideo, and on Instagram and Snapchat at @lpga_tour. 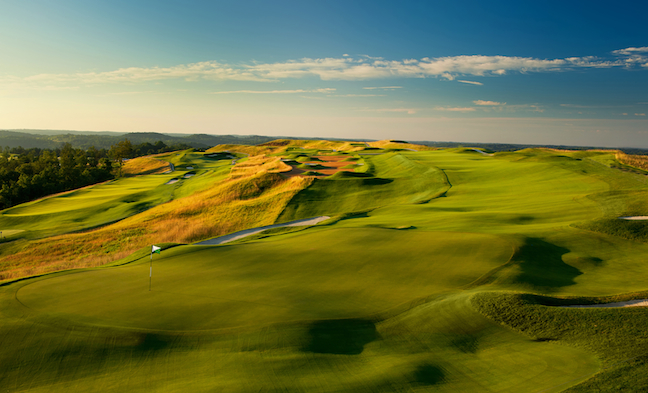 French Lick Resort is a Midwest travel destination that includes West Baden Springs Hotel, French Lick Springs Hotel and the French Lick Casino. Restored to its historic glory after a $560 million renovation, this resort in the rolling hills of Southern Indiana features 686 guest rooms and suites; a 51,000-square-foot casino; meeting and event space totaling 163,000 square feet; 45 holes of golf, including two of the state’s top-rated public courses in The Pete Dye Course at French Lick and The Donald Ross Course at French Lick; two full-service spas with a combined 36 treatment rooms; and an array of fine dining and family-friendly entertainment and recreation options. Visit www.frenchlick.com.