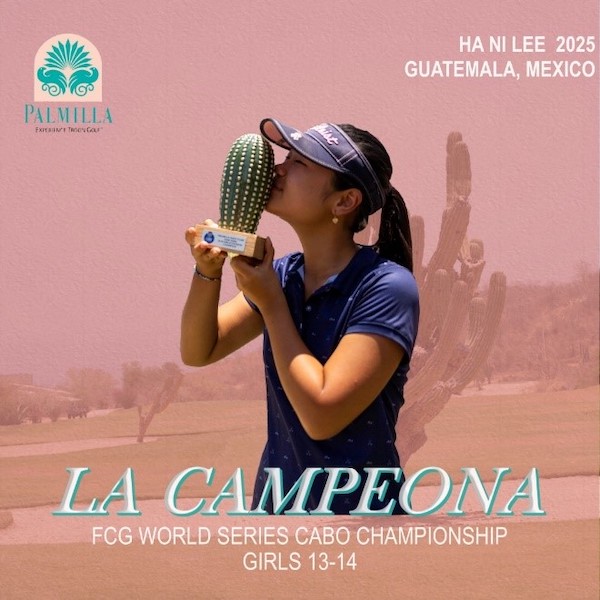 Los Cabos, Mexico  – World-ranked junior amateurs ages 7 – 18 from four countries teed it up earlier this month on the Arroyo and Mountain nines at Palmilla Golf Club in the inaugural Future Champions Golf tournament. This was the first FGC World Series event to be held outside the U.S.

“I fell in love with Los Cabos in 2013 and have wanted to bring a world-class junior golf tournament to Cabo ever since,” said Chris Smeal, founder and president of Future Champions Golf, a global leader in junior golf development. “We thank Palmilla Golf Club and director of golf Jason Ballog for helping us make this happen.”

Under clear sunny skies, the players, many in the company of parents who drove the golf carts and served as caddies, competed for handsome cactus-themed trophies. Champions in each division qualified to compete in the 14th annual FCG Callaway World Junior Championship to be played at 10 different venues in Rancho Mirage, Calif. from July 18 – 20.

The stroke-play tournament was a 54-hole event for the majority of the players. The scores were impressive. For example, in the Boys 15 – 18 division, Enrique Karg of Guadalajara recorded rounds of 68, 71 and 70 on the par-72 course for a -7 total of 209. In a playoff, he defeated Jose Ignacio Arzu Garcia of Guatemala, who also turned in a total score of 209.

Younger children (a few of the boys and girls were as young as five years old!) played nine holes per day in a special 27-hole competition.

Palmilla, the first Jack Nicklaus Signature course in Latin America, set the stage for top-shelf golf in Los Cabos when its Arroyo and Mountain nines opened in 1992. (The club’s Ocean nine was added in 1999). Chiseled into in a box-shaped canyon walled in by stark brown peaks, the layout fully partakes of the region’s desert-on-ocean setting. Routed around cactus-covered hills, boulder-strewn arroyos and vast waste bunkers, Palmilla’s five sets of tees (including a forward set of markers for the youngest players) provided exceptional versatility. For players in the Boys 15 – 18 division, heroic carries over water features and raw desert were required, but broad terraced fairways, generous bail-out areas and open-entry greens accommodated players at every skill level.

The golf club is five minutes from One&Only Palmilla, a legendary hideaway built in 1956 by the son of a former president of Mexico. Later transformed into a world-class resort, this elite retreat extends onto a rocky promontory that juts into the sea, where the water is calm enough for swimming in a trio of sheltered coves. Even before its guest rooms were restyled and its restaurants rebranded, this lushly landscaped property reigned as the grand dame of Cabo’s 5-star hotels.

Based on the success of the inaugural event, sponsored by Callaway Golf and Tough as Steel, Smeal said he hopes to return to Los Cabos next year with 200 to 300 junior players competing at multiple venues.

“We are incredibly proud of all the juniors who have grown up in the FCG program,” Smeal stated, noting that more than 3,000 players have gone on to play collegiate golf across the U.S. Prominent alumni include PGA Tour stars Collin Morikawa and Xander Schauffele; and Patty Tavatanakit, who won the 2021 ANA Inspiration, an LPGA major championship.