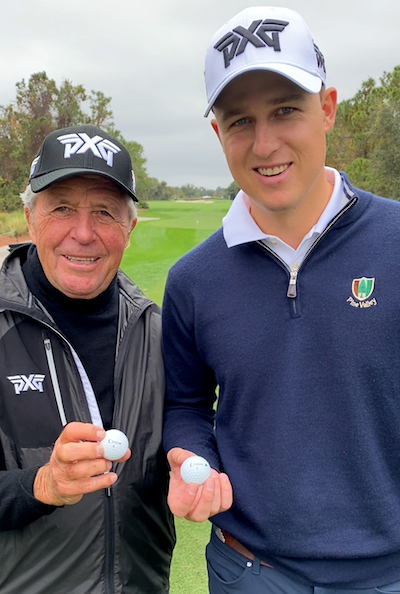 BUFFALO, NY – OnCore Golf is pleased to announce that golf-legend Gary Player and his grandson James Throssell will be teeing up the newly introduced VERO X1 tour ball at the PNC Championship this week in Orlando, FL.  Player, who became an ambassador for OnCore Golf in 2019, has been a huge fan of both the ELIXR and VERO X1 tour balls.  He and James will both be using the VERO X1 this week at the PNC Championship.

Gary Player has won a total of 165 professional tournaments, including twenty-four on the PGA Tour (three of his nine majors were Masters wins) and nineteen on the senior tour.  He played the OnCore ELIXR at the 2019 Masters Par Three tournament and used it for the Honorary tee shot to kick things off at Augusta that year.

Building off of their award-winning three-piece ELIXR tour ball, the VERO X1 features a thinner cast urethane cover, a nano-thick transition layer between cover and mantle, a high modulus, perimeter-weighted mantle, a high energy core, 85-compression and a 318-dimple pattern.  These elements combine to deliver turbocharged performance that is seen in the balls enhanced speed and exceptional distance, noticeably greater stability during flight in windy conditions, tighter shot-dispersion, and more control and responsiveness to irons and wedges for high skill shots.

The only golfer to win the Grand Slam on both the PGA Tour and the Champions Senior Tour, Gary Player’s journey winning across six continents led him to a golf ball company in Buffalo, New York.

“There are very few golfers who can match the experience and success of Mr. Player and his enthusiasm for our golf balls has been a great validation for OnCore Golf.  Anyone who knows him understands that his career has focused on true performance, quality, and integrity and he would not endorse a product or invest in a company that he did not truly believe in,” commented Keith Blakely, OnCore’s Chairman and CEO.

Gary Player offered his own thoughts: “I’ve been very pleased to see the progress that OnCore has made since I was first introduced to their products a few years back.  I can say without hesitation that the VERO X1 is the best ball I’ve ever played and I expect that it will find its way into a number of tour player’s bags next season as word gets out and players try this ball.  James and I are looking forward to being competitive this week at the PNC Championship and know that the OnCore ball will contribute significantly to that effort.”

For more information regarding OnCore Golf and their suite of award winning golf balls; AVANT55, ELIXR and VERO X1visit http://www.oncoregolf.com/.

OnCore Golf is dedicated to delivering breakthrough technology and innovation while inspiring all golfers to achieve peak performance. The company entered the golf ball industry through development of the first-ever commercially available USGA-conforming hollow metal core ball and has since developed a growing suite of differentiated products that includes the soft low-compression AVANT 55, the award-winning ELIXR tour ball, and the recently introduced top-performing VERO X1 tour ball.  For more information about OnCore Golf, visit www.oncoregolf.com.

Gary Player is a South African professional golfer widely considered one of the greatest golfers ever. The most traveled athlete ever, Player accumulated nine major championships on the regular tour and nine Champions Tour major championship victories. At the age of 29, Player won the 1965 U.S. Open and became the only non-American to win all four majors in a career, known as the Career Grand Slam. Player became only the third golfer in history to win the Career Grand Slam, following Gene Sarazen and Ben Hogan, and only Jack Nicklaus and Tiger Woods have performed the feat since. Mr. Player is also the only man in golf to win the Grand Slam on both the regular and Champions Senior tours. Player has won 165 tournaments on six continents over six decades and was inducted into the World Golf Hall of Fame in 1974.