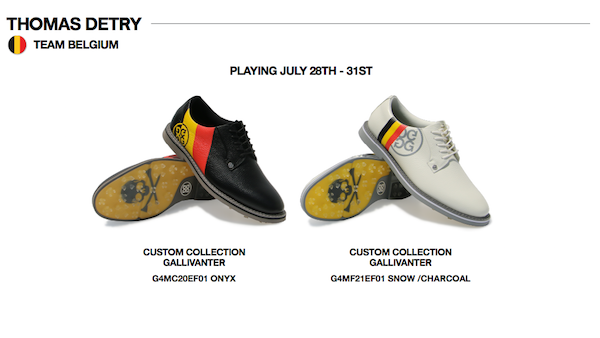 Los Angeles, California – G/FORE is pleased to announce that two of the brand’s sponsored tour players, Thomas Detry and Mel Reid will be wearing G/FORE at the highly anticipated 2020 – turned 2021 – Tokyo Olympics that are set to begin this month.

European Tour professional, Thomas Detry, has been catching eyes out on the course, most recently at the Scottish Open where he narrowly finished second after playoffs. Detry, who will be competing on team Belgium, will be wearing custom-painted Gallivanter golf shoes decked out in Belgium’s colours for good luck, while pairing the style with G/FORE tried and true AA Cabretta leather golf gloves.

Team Great Britain will be represented by way of powerhouse Ladies European and LPGA Tour player, Mel Reid. Like Detry, Reid wears G/FORE footwear and is an avid fan of the Disruptor street style-inspired shoe which you can catch her donning in spirited Union Jack stripes during the women’s competition.

These Nomad Customs painted styles are exclusive to Detry and Reid and will not be available for sale in their Olympic form, but will be available at gfore.com and at select retailers worldwide in their original design. Catch a glimpse of these styles on the official Olympic course starting on July 28th for men and August 3rd for women. 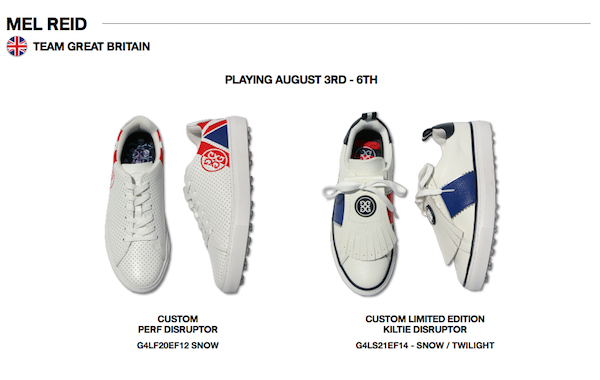 For more information on G/FORE and to shop 2021 apparel, footwear, and accessories, visit  www.gfore.com.

For  additional  press  information,  imagery  and  any  other  requests,  please  contact  pr@gfore.com

G/FORE was conceptualized with a passion for modern design combined with a love of golf. Distinguished by their attention to detail, sophisticated ease, playful nature, youthful energy and sense of humour. Striving to make a powerful and colourful impact on their favourite game. Their intent is to disrupt the industry without being disrespectful to the sport and its rich traditions.

Founded in 2011, G/FORE has established itself as a leader and innovator in golf fashion with a wide range of premium footwear, apparel and accessories for both men and women. The brand has gained the attention and adoration of golf enthusiasts across the globe as well as well-known tour players such as Chez Reavie, Brandt Snedeker, Kelly Kraft, Alvaro Quiros, Thomas Detry, and Mel Reid, among many others.

G/FORE products can be found online at gfore.com along with specialty retailers and top golf pro shops in the 35+countries.