NBC special to showcase “Must-See Moments of the Decade” 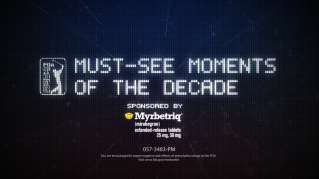 PONTE VEDRA BEACH, FLORIDA – NBC Sports will air an hour-long special titled PGA TOUR 2019: Must-See Moments of the Decade sponsored by Myrbetriq (mirabegron) that will look back on incredible shots and storylines that shaped the decade. The NBC Sports feature, produced by PGA TOUR Entertainment, will air on Sunday, December 22 at 1 p.m. ET.

The 2010s have been an incredible era on the PGA TOUR as players have thrilled audiences and impacted fans worldwide. Must-See Moments of the Decade will take an extended look at some of the most memorable stories from the decade through in-depth interviews with players and analysts who experienced them first-hand.

Along with highlighting key storylines and themes of the decade, the special will relive the drama of Rickie Fowler’s heroics on the famed Island Green at THE PLAYERS Championship, Billy Horschel’s improbable path to a FedExCup title, Jonathan Byrd’s incredible playoff-winning hole-in-one amidst darkness at the Shriners Hospitals for Children Open, as well as Tiger Woods’ growing legacy.

The PGA TOUR, headquartered in Ponte Vedra Beach, Florida, co-sanctions more than 130 tournaments on the PGA TOUR, PGA TOUR Champions, Korn Ferry Tour, PGA TOUR Latinoamérica, Mackenzie Tour-PGA TOUR Canada and PGA TOUR Series-China. Members on the PGA TOUR represent the world’s best players, hailing from 28 countries and territories (93 members are from outside the United States). Worldwide, PGA TOUR tournaments are broadcast to 226 countries and territories in 23 languages. Virtually all tournaments are organized as non-profit organizations to maximize charitable giving. In 2018, tournaments across all Tours generated a record $190 million for local and national charitable organizations, bringing the all-time total to $2.84 billion.

Astellas Pharma Inc., based in Tokyo, Japan, is a company dedicated to improving the health of people around the world through the provision of innovative and reliable pharmaceutical products. For more information, please visit our website at https://www.astellas.com/us/.