Resulting in 4,788 Rounds Played and Eclipsing the Previous Daily Record in the Country by over 2,500;

Edinburgh, Scotland – Shot Scope, a leading international manufacturer of GPS-based game management systems and laser rangefinders, enjoyed its biggest product-usage day ever, as the game finally returned in England following the pandemic shutdown, and masses of golfers headed to the course for the first time this year.

On March 29th, 446,000 shots were recorded by Shot Scope GPS Smart Watches; a figure that represents the largest amount of tracked shots on a single day in England. This correlated to 4,788 rounds played, eclipsing the previous daily record in the country by over 2,500, while a Shot Scope watch was used to track performance at over 75% of courses. The mass tracking of shots speaks volumes to the popularity of Shot Scope technology and products around the world, including the V3 Smart Golf Watch, PRO L1 Laser Rangefinder, and suite of game management, performance tracking and distance measuring technologies. 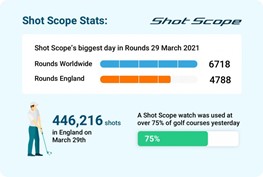 “Golfers in England exploded onto golf courses this week and we are thrilled that so many players were outfitted in Shot Scope technology, as we continue to track not only player performance, but trends in the game,” said David Hunter, CEO, Shot Scope. “Game management technology, including performance tracking and distancing measuring, is as popular as ever and Shot Scope continues to provide advanced technology that is helping golfers improve every day.”

Based on Shot Scope’s game tracking technology, the majority of golfers heading back out to play in England were rusty, with the average score coming in at +21.71, compared to an average of +14.35 last year. This resulted in a score average +/- against handicap of +5.23. Only 30% of users managed to successfully find the first fairway, down 18% on the average, and a staggering 39% appeared to have suffered from the dreaded first tee slice to the right.

Additionally, it appears that driver was the club of the day from the first tee for many golfers on Monday (for those who played a Par 4 or Par 5), with an incredible 94% of players opting for the big stick.

Using Shot Scope’s new strokes gained platform, the Company’s data determined that while the majority of users found trouble from the tee more often in comparison to 2020, it was on the greens that they saw the biggest dip in performance. Golfers lost over 40% more shots due to poor putting performance against the Shot Scope average for 2020, with strokes gained putting stats against a scratch golfer dropping from an average of -3.52 to -5.08.

Promisingly, the statistics show that there is hope. The average score recorded on the back nine, for golfers that completed all 18 holes, dropped by 4.03 strokes, showing a marked improvement as they settled into the round.

Backed by patented Power-Sense AI strap technology that captures data on every shot, V3 delivers golfers instant feedback to better understand their swing and reach optimal performance. The technology creates an ever-increasing volume and accuracy of data collected from the golfer during play, leading to more insights and statistics that help the player understand their game better, improve on-course strategy and shoot lower scores. The more rounds the golfer plays with V3, the smarter the AI technology becomes – eventually producing highly refined settings that are personal to that individual. 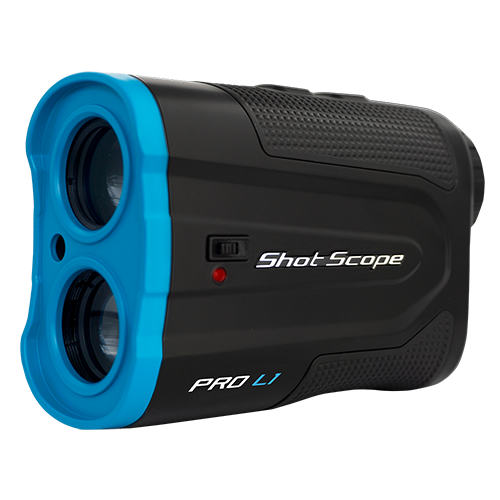 The V3 is complemented by Shot Scope’s new high-performance laser rangefinder, the PRO L1, also offered an unbeatable $199.99 price. A lightweight, easy-to-use device, the PRO L1 offers the perfect combination of size, accuracy and innovation. It is highlighted by Advanced Slope Technology, which provides golfers with compensated distance whether a target is uphill or downhill from their location, and accurate up to 3.6 inches. This function can easily be toggled on and off if being used for tournament play.

The PRO L1 also offers a Precision Clear Lens which allows users to seamlessly switch between the laser’s black and red dual optics, with the option to view distances in either yards or meters. With these options, regardless of lighting on the course, golfers will be able to capture the target and be confident in the number. And, with six-times magnification, the PRO L1 has a range of up to 875 yards, meaning the flagstick is always within reach. The rangefinder also features Target Lock Vibration so it knows when the target is hit. The water-resistant laser was developed to play in all weather conditions, carrying conveniently positioned grip patches to prevent slipping from the hand.

Keep up-to-date with all of the Shot Scope visit www.shotscope.com, or check out Shot Scope news on social media: