PHILADELPHIA, Pa.  – The award-winning GolfTalk Live radio show, a national award-winner for 11 years of its existence, has had a record of constant growth in its 14-year history. Now it is taking another major step toward expansion.

As of April 1, golf industry veteran Allen DePuy, will become a partner of the show and a co-host with founder Tony Leodora.

“This is very exciting news,” said Leodora. “I have known Allen for many years and worked with him on an increasing basis. He is one of the most respected business minds in the golf industry and his personality lends itself to our interview-driven shows.

“In the beginning, his first focus – other than co-hosting our weekly shows – is to expand our reach. He is already in touch with stations in the Central New Jersey area. And he already is exploring the feasibility of taking the show from a regional to a national platform.”

DePuy, a resident of Yardley, Pennsylvania, grew up in Northern Virginia and played collegiate golf at Graceland University in Lamoni, Iowa. Apparently, a decent player at one time – Allen held three separate course records in his lifetime, including a career low round of 63. A former PGA Golf Professional, Allen eventually transitioned into the business side of golf, initially working as a property manager with the Billy Casper Golf organization. His further professional background includes serving as the Employment and Club Relations Director for the Middle Atlantic PGA of America, as well as serving as a Vice President with Gotham Golf Partners – where he managed multiple properties and orchestrated the acquisition of over $50 million in golf properties. Today, Allen is a member of the Colliers International’s Golf Brokerage & Advisory Services Group, and a recognized specialist in the consulting and management and turnaround of under-performing and distressed hospitality assets. 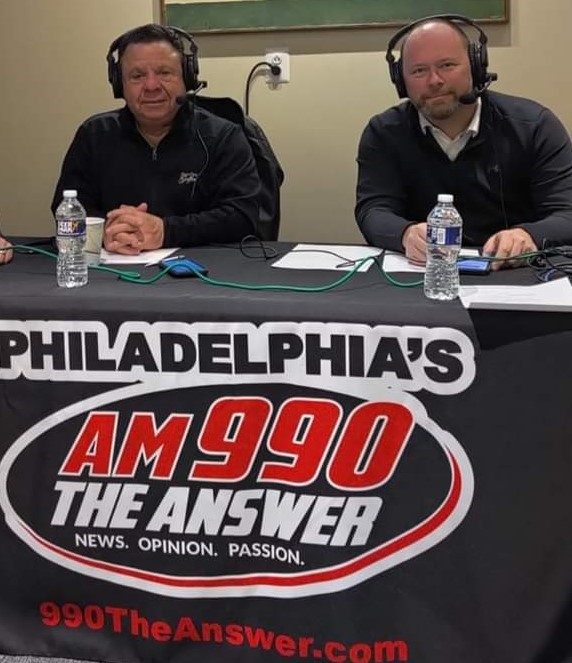 “Over the years I have been intrigued by just about every aspect of the golf business,” said DePuy. “Being involved with GolfTalk Live provides me with a platform for all of these interests.”

“Since beginning the show in 2006, Tony has developed GolfTalk Live into the most recognized and honored golf radio show in the country. Three times it has been named the No. 1 Golf Radio Show in America. If I can add a bit more fuel to that effort, that’s got to be a good thing. I’m looking forward to many more years of success with this show.”

GolfTalk Live debuted in March of 2006 on WNTP, Philadelphia’s AM990 The Answer, a 50,000-watt station that previously was dedicated primarily to newstalk programming. The launch was a bold step, in that the format differed from most sports radio shows at that time, which depended on call-in programming.

From its inception, GolfTalk Live was a 52-week, 100-percent interview-driven show, unique in the world of golf radio at that time. Leodora now joins with DePuy in the show’s dedication to providing golfers with all the latest golf destination information, instruction, interesting golf stories and news from around professional and amateur golf, including interviews with people from all facets of the golf world.

In addition to WNTP, the show’s flagship station, GolfTalk Live began syndication in 2012 with WOND 1400-AM in South Jersey, the only station that gives high-season weekend traffic reports at the Jersey Shore. In 2018 syndication took a big step forward when GolfTalk Live announced the addition of its first FM radio station. WNPV 1440-AM and 98.5-FM joined the list of syndicated stations featuring the GolfTalk Live radio show. The Lansdale (Pa.) based station airs in Bucks County, Montgomery County, and the Lehigh Valley. WNPV is a family-owned talk radio station that has been serving the community for 60 years.

Also, a significant expansion took place from the outset through internet broadcasting. GolfTalk Live joined a number of websites across the country that host the show and reach a large audience.

Over the years, GolfTalk Live has broadcast from locations in 23 different states, plus Puerto Rico. The show also broadcasted from seven foreign countries – Canada, Mexico, the Dominican Republic, St. Kitts, Jamaica, the Bahamas, and Scotland.

Even more stunning is the collection of luminaries from the golf world and beyond who have been guests on the show. The list from previous years is amazing … and it was expanded in 2019 thanks to interviews with Jack Nicklaus, new World Golf Hall of Famer Jan Stephenson and Baseball Hall of Famer Mike Schmidt.

Regular annual highlights of GolfTalk Live include extended coverage from the PGA Merchandise Show in Orlando and the annual package known as the Myrtle Beach Report, which includes 13 weeks of reviews of many courses, plus shows at the start and the end of the world’s largest golf tournament – The Myrtle Beach World Amateur Handicap Championship.

There also is the “Summer at the Jersey Shore” – a string of remote broadcasts from the great golf courses of South Jersey. In the winter, the GolfTalk Live Winter Invitational Series is played, right after the live broadcast of the radio show, at the two Play-a-Round Golf facilities – Malvern and Ardmore. For equipment news, there is the Product of the Month … unveiled on the second Saturday of each month. For an insider’s look at the game, there is the Putting Corner with Dave Hamilton.

“It’s hard to believe the network of great people and sponsors that has developed from this show,” said Leodora. “And it’s even harder to believe that 14 years have passed so quickly. I guess time flies when you are having fun … and we are having more and more fun on the show, as we now begin our 14th season.”