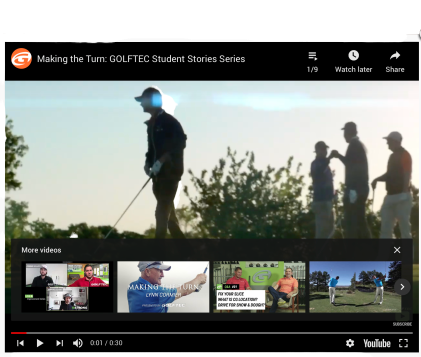 (Denver, CO) GOLFTEC, the world leader in golf improvement and club fitting, released a new episode of their Making The Turn series in April. Focusing on GOLFTEC Students from around the world, the series examines their passion and dedication to the game of golf, the impact its had on their lives, and how golf connects us as a greater community.

The latest installment of Making The Turn features Terry Doyle, a golfer who was diagnosed with stage 4 head and neck cancer. It was a tough time, diagnosis and treatment that included surgery, chemo and radiation. He lost about 60 pounds, and his doctors advised him to stay on his feet and keep moving. He turned to golf and discovered far more than a simple game to help him recover – golf changed his life, and his relationships with his family and friends.

“After the treatment, I just needed to get on the road to health,” said Terry Doyle. “That was actually the beginning of a good journey.”

“We almost lost him,” said his sister, Celeste. Coach Dane Olah added, “It was incredibly serious. Life threatening.” Celeste continued, “He picked up golf and found a love for the game, and for life. Then he brought Kyle to the game, and they bonded over their mutual love of golf.”

“One of the greatest things that golf has done for me, personally, for my family,” said Doyle. “It’s allowed me to spend time with my nephew, Kyle.”

Kyle was born with a challenge – he has cerebral palsy. His left side doesn’t work so well, it’s partially paralyzed. He joined GOLFTEC 4-5 years ago and it was clear this was not going to be a Ben Hogan swing, this was going to be Kyle’s swing. His first Coach – Henry – and current Coach Dane Olah, developed a one-armed swing for Kyle, and they figured out how to make Kyle a golfer.

“These young guys have developed a swing for Kyle and changed his life. They have given Kyle something that he can excel at. And Kyle’s a good golfer,” said Doyle. “I’ll tell you what I enjoy most about the game of golf. I’ve talked a little bit about playing golf with my sons in law, my nephew and my friends… In the evenings here at Silverado, when it gets quiet out, and the sun starts to go down, my wife, Kim, and I go out in the golf cart, play a few holes, it just feels peaceful. It feels like this is as good as it can get.”

Since 1995, GOLFTEC has become the world’s largest provider of golf lessons and premium club fittings, operating more than 200 corporately-owned and franchised Training Centers in all major U.S. cities, Canada, China, Japan, Hong Kong and Singapore. A top employer of PGA Professionals, the company’s 700-plus coaches have taught more than nine million lessons with students dropping an average of seven strokes from their scorecards. Its highly-trained coaches leverage leading-edge technology for a completely fact-based approach to instruction, practice and club fitting. GOLFTEC’s leadership position in golf improvement is augmented by its SwingTRU Motion Study – the largest ever conducted on golf swing mechanics.