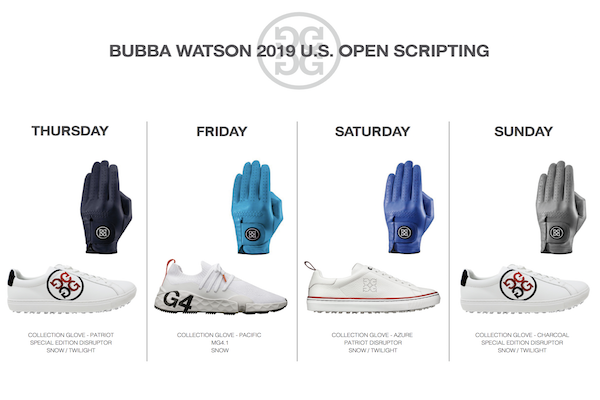 G/FORE ANNOUNCES RELEASE OF THEIR MG4.1 SHOE DURING THE WEEK OF THE U.S. OPEN

Los Angeles, California – Luxury golf brand G/FORE announced this week that their new crossover shoe will be available for purchase Wednesday, June 12th to kick off the U.S. Open.

The crossover style had a very successful pre-release last month. It has been played in by tour professionals such as Kelly Kraft and is praised by others such as musician Adam Levine, garnering the company a “tour approved” as well as “street approved” status for their latest on and off-course shoe.

Aptly released last week, the red, white and blue Limited Edition MG4.1 in Twilight fits the theme of the U.S. Open. In addition to that colourway, expect to see 5 more colour variations offered when they officially launch this week in a range of unisex sizes.

This weekend, Bubba Watson, who has worn G/FORE for the past couple of years, will be wearing custom Disruptors painted by Roly Padron of Nomad Customs. Fans have come to expect Watson and G/FORE to surprise them with a unique version of their classic Disruptor at major tournaments and the U.S. Open themed pair will not disappoint.

Brandt Snedeker, who wears G/FORE gloves and shoes, will also be keeping with the theme of U.S. colourways this weekend. 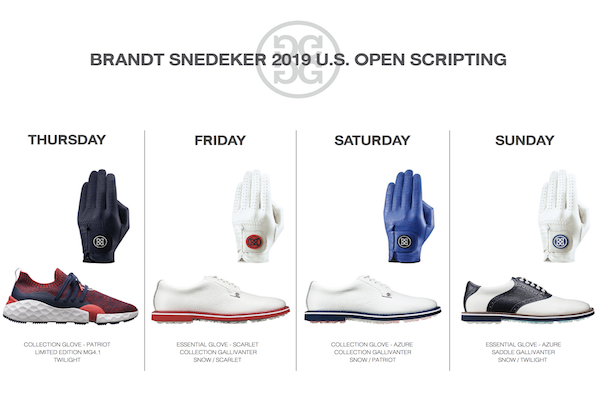 Brandt Snedeker, who wears G/FORE gloves and shoes, will also be keeping with the theme of U.S. colourways at 2019 U.S. Open Championship.

For more information on G/FORE and to shop the Autumn Winter 2019 footwear collection visit www.gfore.com

For additional press information, imagery and any other requests, please contact pr@gfore.com

• G/FORE was conceptualized with a passion for modern design combined with a love of golf. Consistently striving to make a powerful and colourful impact on their favourite game. Their intent is to disrupt the industry without being disrespectful to the sport and its rich traditions.

• G/FORE’s reputation is now established among the most innovative brands in golf fashion with its wide range of premium golf shoes, apparel and accessories for both men and women.