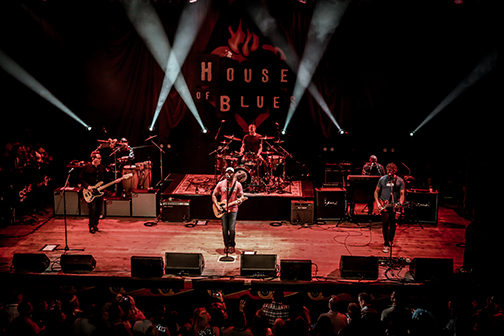 Event Has Raised More Than $7.1 Million For Charity

MYRTLE BEACH, SC — Tickets for the 25th anniversary of the the Hootie & The Blowfish Monday After the Masters Celebrity Pro-Am golf tournament go on sale Monday, February 18 at 10 a.m. at the House of Blues, the Barefoot Resort & Golf pro shops and all Ticketmaster outlets.

The Monday After the Masters will be played at Barefoot Resort’s Dye Club on April 15. This will mark the 17th consecutive year the event is played at the Dye Course and festivities will begin with entertainment on the first tee at 9 a.m. The tournament will tee off at 10 a.m.

Tickets are $20 for adults and children 12 and under are admitted free when accompanied by a paying adult. Monday After the Masters has sold out 12 consecutive years, annually attracting a crowd of more than 6,000 people.

Tickets for this year’s event, which coincides with the 25th anniversary of Hootie & the Blowfish’s debut album, Cracked Rear View, and the band’s return to the road on its 2019 Group Therapy Tour, are expected to sell quickly.

All ticket proceeds benefit the Hootie & the Blowfish Foundation, which supports the educational needs of children in South Carolina and the South Carolina Junior Golf Foundation through a fully funded endowment.

For more information about the Hootie & The Blowfish Monday After The Masters Celebrity Pro-Am, visit HootieGolf.com.