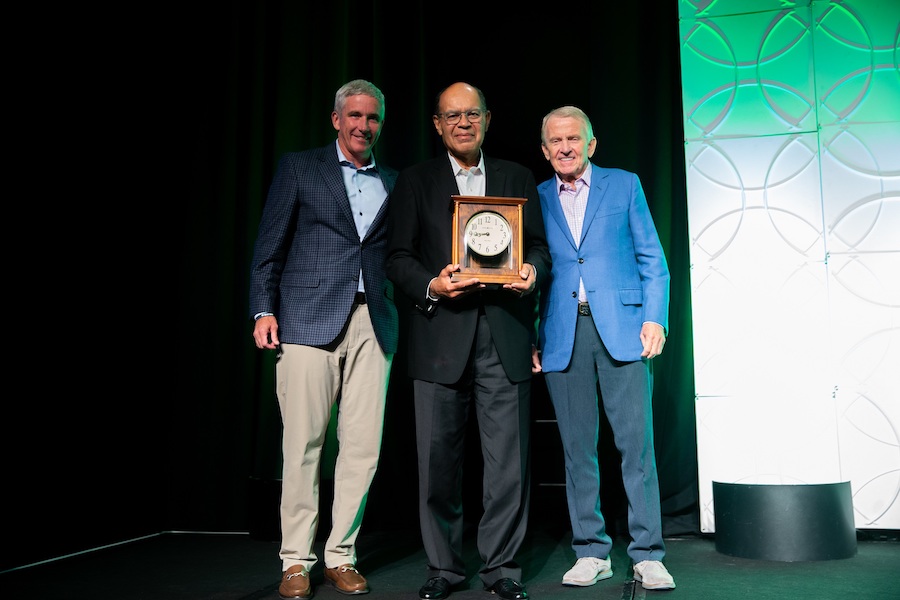 The former First Tee CEO received the award in Dallas, where Chapter leaders gathered this week to celebrate the organization’s 25 years of building game changers

Dallas  – First Tee celebrated its 25th anniversary this week with a Network Summit in Dallas that was capped off with a big honor for retired CEO Joe Louis Barrow, Jr. PGA TOUR Commissioner Jay Monahan and former Commissioner Tim Finchem presented the award to Barrow, who led the nonprofit organization from 2000 to 2017.

Barrow combined passion, enthusiasm and empathy as he led First Tee through a time of incredible growth. Under his leadership, First Tee expanded its network of Chapters, which now stands at 150. The organization also launched its School and Community Programs, which serve millions of kids who may not have access to a golf course.

“While at First Tee, Joe was appropriately called the “Chief Evangelist” because he was always sharing a great story about the impact First Tee had on a particular young person,” said Monahan, who also serves as Chair for the First Tee Board of Governors. “Joe led with many strengths, but perhaps his greatest was ensuring that the kids remained at the heart of every decision.”

Barrow was CEO when First Tee launched its first national participant event, the Life Skills and Leadership Academy. In 2021 the event was renamed the Game Changers Academy Honoring Joe Louis Barrow, Jr. and evolved to address challenges teens face in their daily lives including social justice issues and diversity, equity and inclusion – topics near to Barrow’s heart.

Barrow took on his role as CEO while First Tee was in its infancy. The nonprofit – which teaches life skills through the game of golf – was first announced by Finchem and other leaders from the golf industry at a Central Park press conference on Nov. 13, 1997. A quarter century later, the organization has served millions of kids.

“I am truly humbled by this recognition,” said Barrow. “And I am deeply proud of the positive impact First Tee has had over the years. It wouldn’t have been possible without my dedicated colleagues, the coaches and Chapter staff, and supporters who believed in our mission.”

The Lifetime Achievement Award was one of several awards First Tee presented in Dallas during the organization’s Network Summit held Nov. 16-18. The Summit brought together representatives from First Tee’s network of 150 chapters to celebrate the organization’s 25th anniversary and continue building momentum for the future with robust workshops, training and peer-to-peer networking. Appearances were made by President George W. Bush, honorary chair of First Tee, PGA TOUR player Will Zalatoris, artist and criminal justice reform activist Valentino Dixon and other inspirational speakers. The Summit was presented by Century Golf Partners, supported by 3M and made possible by other corporate partners who stand behind First Tee’s mission. The Dallas event also featured an Alumni Summit presented by Gallagher and an Innovators Forum for participants.

“There are more than 10,000 volunteers, Chapter staff members, board members and donors who make First Tee the impactful organization it is today,” said current First Tee CEO Greg McLaughlin. “It’s so special to be able to honor a handful of those people who have truly changed kids’ lives for the better.”

First Tee (www.firsttee.org) is a 501(c)(3) nonprofit youth development organization that is supported by the PGA TOUR. Its mission is to impact the lives of young people by providing educational programs that build character and instill life-enhancing values through the game of golf. In 2022, First Tee celebrates its 25th anniversary and reaching millions of youth through its network of 150 Chapters, 10,000 schools and 1,700 youth centers. Headquartered in Ponte Vedra Beach, Florida, USA, programs are delivered in all 50 United States and select international locations. President George W. Bush serves as Honorary Chair.