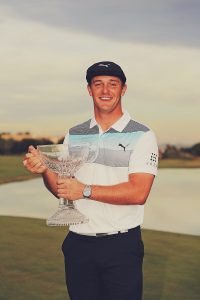 An eagle on the 16th hole of the final round put him in the lead late in the tournament and he never looked back. His 5-under par 66 was enough to best defending champion Patrick Cantlay by a stroke and notch his fifth career win.

DeChambeau is one of the hottest golfers in the world right now. This was his third victory in his last five starts on the PGA TOUR which include his FedExCup Playoff wins at The Northern Trust and the Dell Technologies Championship.

This victory earned him a paycheck for $1.26 million dollars and 500 FedEx Cup Points. He is currently ranked 5th on the FedEx Cup Points List and 5th in the Official World Golf Rankings.

In the past two years, JumboMax Team Members, Bryson DeChambeau and Kelly Kraft have combined earnings in excess of $14.7 Million Dollars.