Woods is the first golfer besides Palmer to appear on Kingdom’s cover, which previously had featured only Arnold Palmer or stunning golf courses. The 15-time major winner is profiled in advance of his captaining the U.S. Presidents Cup team, and his exciting victory in this year’s Masters is included in an editorial on sports’ greatest comebacks. Among others, that piece looks at the unbelievable stories of Greg LeMond (shot with a shotgun before winning his second Tour de France); James “Cinderella Man” Braddock, the boxer who beat Max Baer against incredible odds; and Ben Hogan, who famously survived a horrific car crash and then came back to win the U.S. Open (and five additional majors). 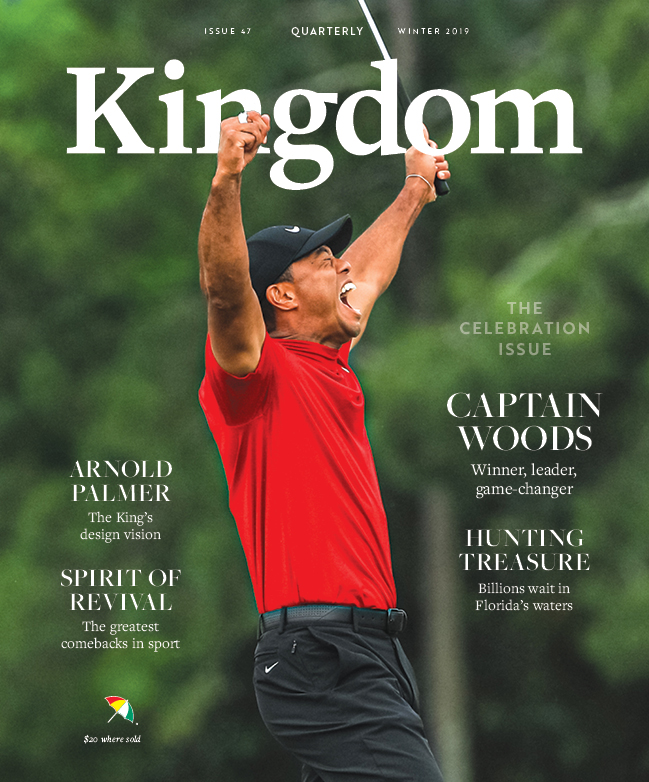 Digging deep, there’s also a compelling editorial on the billions of dollars in treasure that remain in the world’s oceans, waiting to be retrieved, and the incredible story of Mel Fisher and his family, perhaps the world’s most successful treasure hunters. Finding treasure of a different sort, Suzann Pettersen spoke with Kingdom about the perfect moment she was offered—and seized—at this year’s Solheim Cup, while Jon Rahm spoke with us about his Spanish roots and how his game has grown. (We also take some time to sample wines in Rahm’s home country.)

Sports’ greatest celebrations, the incredibly fast and exciting new G70 from Genesis, and plenty of ideas for holiday gifts and libations are also included, along with a compelling look at Arnold Palmer’s golf course design tenets, still being built-upon today by the incredible team at Arnold Palmer Design Company.

“As ever, this issue of Kingdom features the kinds of stories that Mr. Palmer enjoyed,” says Kingdom Publisher Matthew Squire, “great triumphs, great comebacks, a great (and fast) car in the new Genesis, great golf, great libations and food, and, most importantly, great ways to celebrate good times with friends and family.”

Appearing as the Palmer companies ready to celebrate “90 Years of Arnold Palmer,” the winter issue of Kingdom highlights the celebrations of this September 10th, on what would have been Palmer’s 90th birthday. Those included honorable nods from Walt Disney World and from the Empire State Building, which was lit in Palmer’s trademark umbrella colors on the evening of his birthday. All in all, the new issue of Kingdom is a perfect winter companion, whether readers are fireside amidst a snowy landscape or sitting in the sun closer to Palmer’s home at Bay Hill.