Kokrak, 35, put up incredible putting stats with his Studio Stock 38 putter to finish the weekend at 20 under par after a bogey-free final round of 64. He led the field in Strokes Gained Putting, making over 400 feet of putts over four rounds, and a record-breaking 14 putts over 10 feet.

Kokrak went head-to-head with the No.8 player in the world, Xander Schauffele, and many attribute his win over Schauffele to a new-found short game strategy.

His putting success comes after a recent change in his Bettinardi putter, when his caddie, David Robinson, encouraged Kokrak to switch to a 36 inch putter with a stiffer shaft to support his 6-foot-4-inch stature. 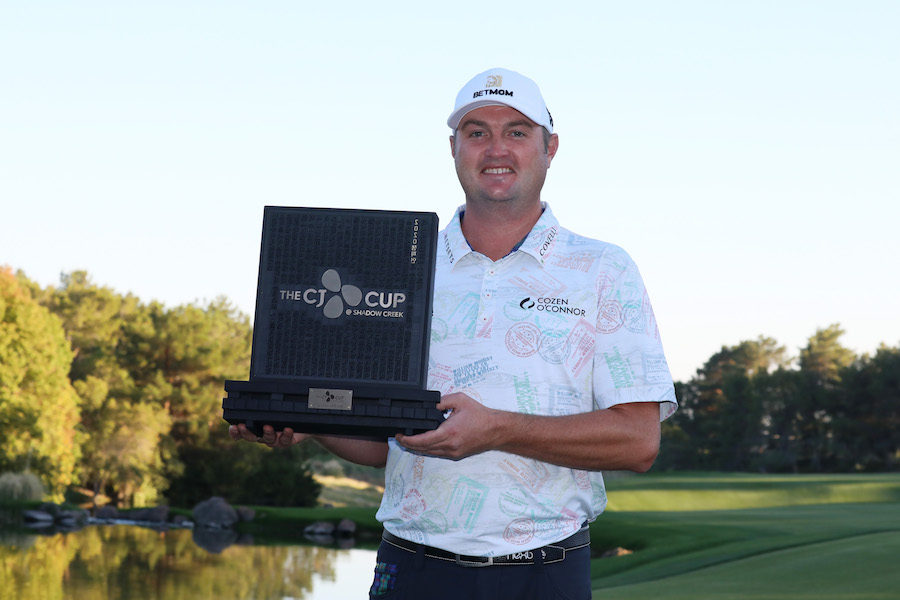 LAS VEGAS, NEVADA – OCTOBER 18: Jason Kokrak of the United States celebrates with the trophy after winning during the final round of The CJ Cup @ Shadow Creek on October 18, 2020 in Las Vegas, Nevada. (Photo by Christian Petersen/Getty Images)

Kokrak visited Bettinardi’s Studio B before the BMW Championship, their state-of-the-art putting facility outside of Chicago, Illinois, to get dialed-in with his new putter and make key adjustments. From data inputs from their Quintic Putting System and expert fitters, Bettinardi helped build confidence that ended up paying dividends, truly, with a $1.75 million winning at The CJ Cup.

“We couldn’t be more proud to be such a big part of helping Jason finally break through on the PGA Tour with his huge win at The CJ Cup. His putting was beyond impressive, 400 feet of putts-made is an incredible stat line,” Executive Vice President Sam Bettinardi said.

“The veteran showed persistence and trusted our talented team to make him the exact putter to help him win on Sunday,” Sam said. “My father and I are extremely happy for Jason and look for his confidence on the greens to lift him to many more victories in the future.”

After 10 years on the PGA TOUR, Kokrak is now his career-best at No.26 in the Official World Golf Rankings, having surged since signing with Bettinardi in February of the 2019 season when he was ranked 123rd.

“To have Bettinardi be such a big part of Jason’s success, especially for a veteran who sought our help on the greens, it doesn’t get much better than that for Bettinardi Golf,” Founder and CEO Bob Bettinardi said. “He made everything, which instills a confidence in our products that can’t be beat, and we can’t wait to see his progress continue into the rest of the season.”

Kokrak will head to Sherwood Country Club in Thousand Oaks, Calif. to compete in the ZOZO Championship. Follow Bettinardi Tour Dept. on Instagram for more coverage of Kokrak’s success.

Bettinardi Golf is a premium golf equipment company that designs and crafts precision-made golf products in the United States, just outside Chicago, Illinois, including putters, wedges, milled accessories, and more. Since 1998, Bettinardi has amassed more than 80 worldwide Tour victories, and counting. For more information please visitwww.Bettinardi.com.