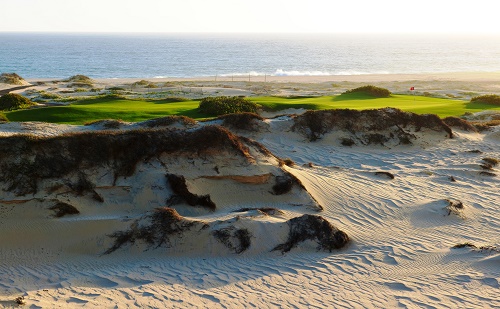 Acknowledging the rampant growth and rising prestige of international golf course development, the magazine stated, “It’s tempting to describe Golf Digest’s fourth biennial ranking of the World’s 100 Greatest Golf Courses as a contest between advanced age and youth, legends versus new kids, Old Guard versus upstarts.” The editors acknowledged the fact that 30 of the ranked courses were built in the 21st century, including two of the three award-winning courses in Los Cabos.

But the publication was quick to point out that panelists “aren’t examining birth certificates or sell-by dates.” They’re examining the excellence of each candidate’s course architecture based on the judgement of the magazine’s course ranking panel, which includes more than 1,700 North American golfers and more than 350 international players.
With three courses on an elite roster published by the sport’s leading print and digital outlet, Los Cabos continues to reaffirm its position as the reigning ‘Golf Capital of Latin America.’

Diamante G.C. (Dunes) moved up 13 spots and now sits at No. 34 on Golf Digest’s exclusive roster. “Mexico’s first true links (was) fashioned by Davis Love III and his design team…from a fantastic set of white sand dunes along the Pacific Ocean, huge portions of which are without vegetation and seem like enormous snow drifts,” the magazine’s digital edition stated. “Holes hug the flowing terrain with little artificiality. Two holes on the back nine once played around a long lagoon, but have been replaced by (the) new 12th and 13th holes on the beach. Now all of the second nine is adjacent to the ocean, amidst the tallest dunes.” Perhaps most significantly, “No other links in the world sports cactus.”

Cabo del Sol (Ocean), the course credited with placing Los Cabos squarely on the international golf map, dropped to No. 91 on the list. However, the seaside layout, rebranded and reopened as the Cove Cub last month after a major makeover by original designer Jack Nicklaus, likely will move up in the rankings on the next go-round. “When Jack Nicklaus first saw this Baja Peninsula site, what can best be described as Scottsdale-meets-the-Sea of Cortez, his thought was: ‘This is my chance to design a Pebble Beach,’ the magazine reported. “He took full advantage of that chance, developing an exciting routing that plays from highlands of desert cacti over dry washes and down to the sea on both nines.”

Moving up four places to No. 93 on Golf Digest’s roster is Querencia C.C., a marvelous Tom Fazio design opened in 2000 and set within a private 1,800-acre golf community. “The routing wanders the rugged high desert plateau on the outward nine, toward the Sea of Cortez, hopscotching a dramatic canyon on the par-3 eighth,” the report stated. “After reaching the far point on the par-5 ninth, the course turns for home over similar terrain, via two more outstanding par 3s, the 11th and 14th.”