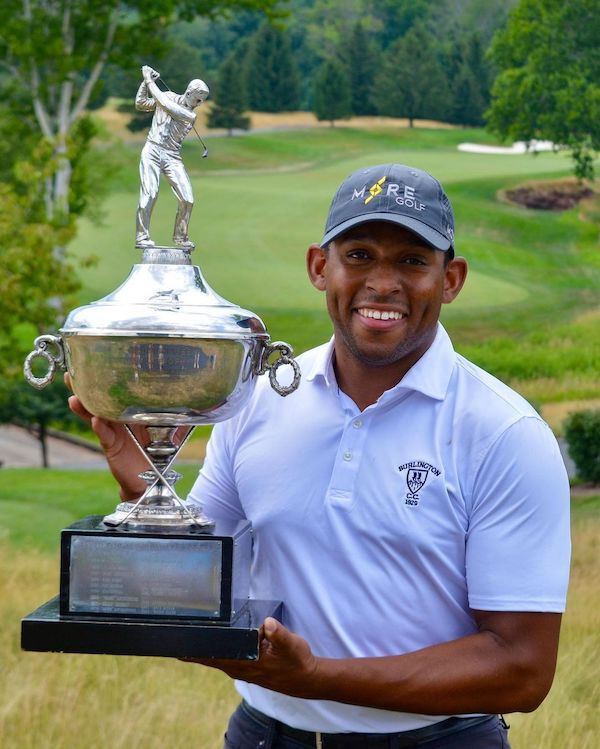 “I don’t take it lightly,” Kelly told the New Jersey State Golf Association. “I love being a pioneer … Hopefully it’s just a steppingstone and I can do this on a broader scale, not just in New Jersey, but nationally and globally. That’s the ultimate goal.”

Kelly works as an Assistant Professional at Burlington Country Club (New Jersey) as he pursues a PGA Tour card. He called his switch to MORE GOLF a “turning point” and credits the company’s revolutionary technologies for propelling his game to new heights and allowing him to compete on an international level.

“MORE GOLF has changed my golf career,” Kelley said. “Since switching to MORE GOLF clubs, my stroke average has dropped three strokes and I’m averaging more than 5.5 birdies per round. Every MORE GOLF club in my bag can do things traditional OEM clubs simply can’t. That’s why they’re in my bag and should be in a lot of golfers’ bags.”

Kelly had a one-shot lead heading into the final round at The Ridge at Back Brook after carding a course-record-tying 65 in Round 2 of the 54-hole event. He fired 5-under 66 in the final round to earn a spot in a three-playoff with a PGA Tour winner. Kelly played flawless golf in the playoff, carding par, birdie, birdie to win the playoff by four shots.

“Louis is one of the rare players who is comfortable looking outside the box to improve his game,” said MORE GOLF Founder and Designer Bruce Sizemore. “From literally the first shot, he was experiencing the difference MORE GOLF clubs were making to his precision and shot-making ability. I have all the confidence in the world that Louis will achieve his goal of becoming a PGA Tour player, and MORE GOLF is proud to fully support him on his journey.”

MORE GOLF MOD®/1 IRONS, WEDGES, and PUTTERS are available exclusively at than 100 MORE GOLF Authorized Retailers across the world, including all Club Champion locations.

MORE GOLF is helping golfers Reimagine Their GameTM with a modular approach that creates new possibilities.
The Jackson, Michigan-based start-up is developing the only full lineup of 100% American-made golf clubs. With 10 industry-first technologies,

MORE GOLF is poised to change the way golfers think about their games.
Visit moregolf.com for more information. For media inquiries, contact Zak Kozuchowski at zak@rootedsolutions.co or call (804) 426-5108.