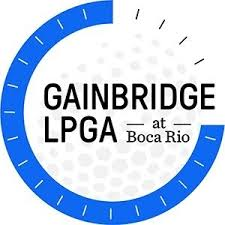 “We are thrilled to continue our work with the LPGA Tour and return to Boca Rio Golf Club for the 2022 Gainbridge LPGA at Boca Rio,” said Dan Towriss, President and CEO of Group 1001, the parent organization of Gainbridge. “In the tournament’s first two years, we have established the Gainbridge LPGA as a world-class championship. It is an honor for us to support women’s golf and provide a platform for the game’s best players to showcase their talents to fans all over the world.”

“We are excited to once again host the world’s best female golfers back to Boca Rio Golf Club in January for the 2022 Gainbridge LPGA at Boca Rio,” said Elliott Wallace, president of Boca Rio Golf Club. “The inaugural event in 2020 was a tremendous success for the Southeast Florida community. We look forward to welcoming the players and local fans back to Boca Rio next January.”

“Gainbridge has been a tremendous partner the first two years of this championship, and we are honored to bring the Gainbridge LPGA at Boca Rio back to Boca Rio Golf Club in 2022,” said Lesley Baker, executive vice president for Outlyr, tournament operator for the Gainbridge LPGA at Boca Rio. “The support from Boca Rio Golf Club and Palm Beach County in 2020 was outstanding, and we look forward to returning for the 2022 edition of this great championship.”

Boca Rio Golf Club, which was founded in 1967 and designed by Robert von Hagge, is situated just four miles from the Atlantic Ocean on 200 acres of native Florida wilderness. A member-owned luxury golf club, Boca Rio is a rolling golf course featuring undulating greens and white sand bunkers with no developed real estate.

The 2021 Gainbridge LPGA was contested at Lake Nona Golf and Country Club in Orlando, Fla., in late February, when Nelly Korda captured her fourth LPGA Tour win at 16-under par. The win was her first on American soil and with her parents in attendance. Korda’s victory also marked the second time in LPGA Tour history that sisters won consecutive events. Her older sister, Jessica, captured the season-opening Diamond Resorts Tournament of Champions in January.

Gainbridge is a wholly owned subsidiary of Group One Thousand One, LLC (“Group 1001”), an insurance holding company and family of companies striving to make accumulation and insurance products more useful and intuitive for everyone. Group 1001 has combined assets under management of approximately $40.5 billion as of March 31, 2021 and continues to look for opportunities to help disciplined investors grow and protect their savings. Group 1001’s family of brands includes Gainbridge®, Clear Spring Health®, and Clear Spring Insurance®. Group 1001 also believes education and sports have the power to transform communities. Its corporate social programs to date have spanned 22 states, positively impacting more than 200,000 youth, and have included public and private partnerships to revitalize youth sports fields in at-risk communities and the creation of mentoring and education programs. For more information, visit www.gainbridge.life and www.group1001.com.