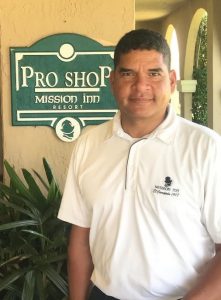 Inn Resort & Club in Howey-in-the Hills, Florida, where he has served as assistant pro since 2014.

An Army veteran, Colon retired from active duty at the rank of Sergeant Major following 23 years of service. He managed the careers of over 24,000 soldiers with a specialization in human resources.

Colon attended the Golf Academy of American in Orlando and graduated with honors in 2014. He will oversee golf operations at this 36-hole facility, named among the top courses in America by Golf Advisor.

Mission Inn’s appeal begins with the resort’s two award-winning golf courses: The must-play El Campeón (The Champion) is one of the oldest 18-hole courses in the South, having opened in 1917. An original member of the Florida Historic Golf Trail, El Campeón’s classic design accentuates 85-foot elevation changes that are unique to the central Florida region.

Las Colinas (The Hills), which opened in 1992, lives up to its name with wide fairways rolling over gentle rises. Its large, undulating greens are surrounded by tropical vegetation, and incorporate large water hazards on many holes.

Colon and his wife, Teresa, a 27-year veteran of the Army, have two children: Luis III attends University of Kentucky majoring in kinesiology and Yvan, a senior at Montverde Academy who plans to study to be a petroleum engineer.