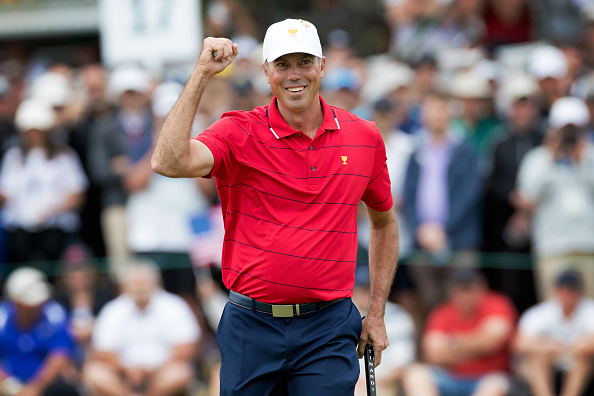 Tinley Park, IL: Bettinardi Golf Tour Staffer, Matt Kuchar, trusted his KM-1 Armlock to sink the winning putt for Team USA to secure their historic 11th Presidents Cup trophy over the weekend at Royal Melbourne Golf Course. The 19-year PGA Tour veteran made the biggest putt of the week for Team USA, when he rolled in a 6-ft birdie on the 17th hole, using his Bettinardi Armlock putter to halve the match versus Louis Oosthuizen and give Team USA the 15.5 points needed to win the Presidents Cup.

Strategically selected by Woods to be one of the final two players to go out for Sunday’s crucial singles matches, Kuchar answered the call, making huge putts to come back from being down 3 to Oosthuizen, and ensure the International Team was eliminated from winning the trophy with his big putt.

MELBOURNE, VIC – DECEMBER 15: Matt Kucher of team USA sinks his putt on the 17th to even the tie during the final round of The Presidents Cup at Royal Melbourne Golf Club on December 15, 2019 in Melbourne, Australia. (Photo by Speed Media/Icon Sportswire via Getty Images)

“It was a historic moment for Bettinardi Golf. Seeing Matt, our long-time brand ambassador, make such a huge putt with immense pressure on him was very exciting for us.” said Sam Bettinardi, Vice President of Bettinardi Golf.

“Matt has been great all year with two big wins, and to end 2019 on top of the golf world, and showcasing the performance of Bettinardi Golf putters, it’s a great way to end another successful year on Tour for us.”

Matt Kuchar first started using the Armlock putting method in 2011, when he contacted Robert J. Bettinardi to help him work towards perfecting a putting stroke that would help eliminate any deviations from setup to impact. The two immediately went to work, focusing on engineering the perfect shaft angle and a putter head that needed to meet weight requirements and technical features to allow a player to setup properly, while at the same time, allowing the face of the putter head to be precise with the forward facing angle needing to be centered at impact.

Eight years later, the technology pioneered by Robert and Matt has been all the buzz worldwide across professional Tours and golfs best amatuers. Bettinardi has seen a record number of consumers contacting them about their Armlock putters, making appointments at their state-of-the-art putting studio in Chicago, Studio B, to get properly fitted and get dialed-in to their specifications. Bettinardi Golf today offers everyday golfers two world-class Armlock putters in their Studio Stock 28 Slotback Armlock (most similar to Kuchar’s Tour putter) and the Studio Stock 38 Armlock.