For over 40 years Morell Studios has been providing museum quality custom awards and trophies to the most prestigious golf clubs and corporate organizations. At the same time, the Metropolitan PGA prides itself in partnering with some of the most influential and community-oriented companies in the United States that not only allow us to promote our PGA Professionals, but also the charitable work they do in our community. 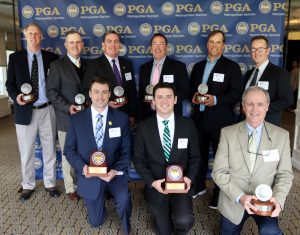 “We are excited to announce that we have partnered with Morell Studios to create a new Met PGA Milestone Program starting this Spring” said Executive Director, Jeff Voorheis, “The PGA Member Milestone Program was created to highlight the accomplishments of both our newest members, as well as, pay tribute to our more tenured PGA Professionals reaching Quarter and Half Century status.” Morell Studios Owner Jon Clay added ” We are excited to expand our relationship with the section and honor the golf professionals for their dedicated service.”Beginning at this year’s Spring Meeting, Morell Studios will present the Met PGA Milestone Awards to those professionals who have either earned their PGA Membership, Quarter Century, or Half Century status since our Fall Meeting in 2017. Members who reach PGA Milestones during the season will be recognized at the Fall Meeting in 2018.

Members who have previously reached Milestones before the development of this Sponsorship will be offered an opportunity to purchase an award at a discounted rate through this agreement.

We look forward to honoring our first recipients of the Met PGA Milestone Awards at the Spring Meeting and are excited about this new Sponsorship that highlights our members accomplishments.

About Morell Studios
Morell Studios is committed to creating the highest quality award and recognition products for the golf industry and corporations. We have enjoyed over 40 years of experience providing best-in-class custom awards, shadow boxes, recognition panels and Hole-In-One awards. Our creations are museum quality and feature rich textures to compliment both traditional and contemporary decor. All of our products are engraved and assembled at our production facility in Florida.
From country clubs to corporations, our products are unmatched in design, craftsmanship and creativity. Learn more about Morell Studios at morellstudios.com; follow us on twitter @morellstudios and on Facebook at facebook.com/morellstudios