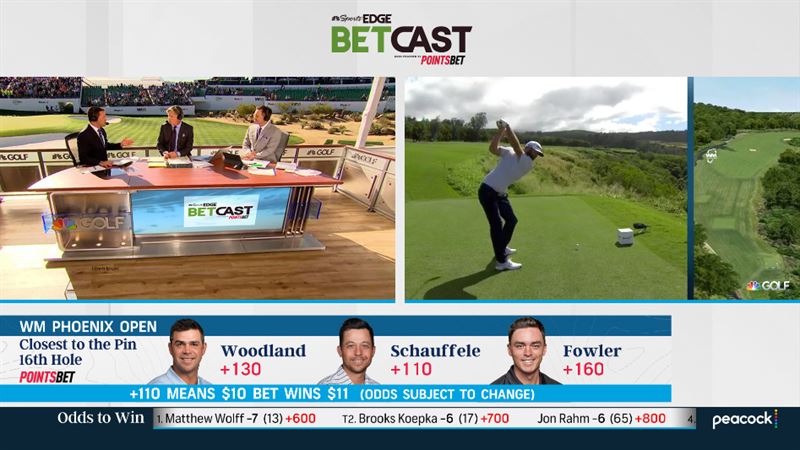 The show – a collaboration by NBC Sports, the PGA TOUR and PointsBet – will premiere on Peacock Premium alongside NBC Sports’ afternoon telecasts of the Waste Management Phoenix Open on GOLF Channel and NBC this Thursday, Feb. 4 through Sunday, Feb. 7 at TPC Scottsdale’s Stadium Course. PointsBet is the official sports betting partner of NBC Sports, and an official betting operator of the PGA TOUR.

Presented across 10 afternoon hours – 2.5 hours in each of the four tournament rounds – the show will primarily follow a dedicated BetCast-exclusive featured group throughout the round each day, while also highlighting exciting moments, notable shots, and compelling storylines from around the course.

From a GOLF Channel Live studio set overlooking the famed, par-3 16th hole, Steve Burkowski, George Savaricas, and Matt Ginella will offer commentary and will be joined via remote by PointsBet Senior Editor and former Chicago Tribune writer Teddy Greenstein to analyze the Waste Management Phoenix Open and discuss the outcomes of potential bets using PointsBet Sportsbook odds. The conversation will highlight the probability of specific scores and shots throughout the tournament and explain how golfers’ odds change throughout. In addition, PointsBet’s head trader Jay Croucher will join from PointsBet’s new U.S. headquarters in Denver to offer an inside look at the way markets are created and provide up-to-the-minute market changes.

PointsBet, will offer more than 500 “bet types” for this event, including:

BetCast will have data-rich companion graphics, highlighting players’ scores and position, odds on props, and integration of tournament leaderboards and odds. All betting odds and information will be provided exclusively by PointsBet Sportsbook.