Big Cedar Lodge and the Ozarks to be put on international display during the re-airing of the celebrity charity golf match on the GOLF Channel Dec. 26 and 27 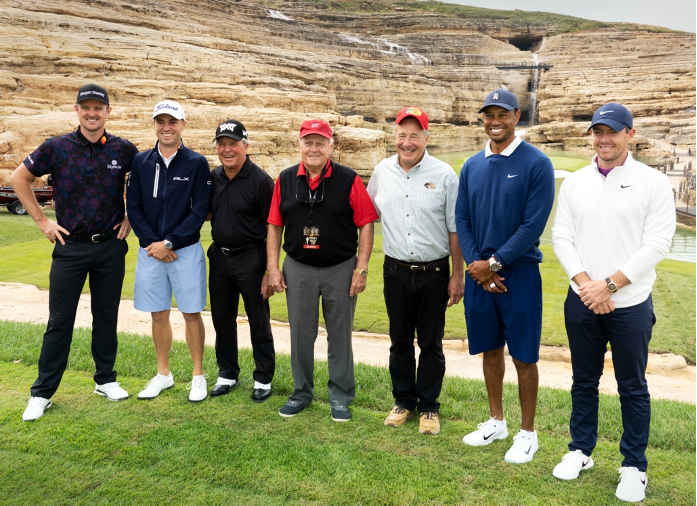 WHO:  The Payne’s Valley Cup charity golf tournament hosted at Big Cedar Lodge on Sept. 22, 2020 (the most watched Tuesday telecast on NBC’s GOLF Channel since 2011) featuring a US versus Europe match with legendary players Tiger Woods and Justin Thomas taking on Rory McIlroy and Justin Rose with special shootout appearances by Jack Nicklaus and Gary Player.

WHAT:   The GOLF Channel placed an international spotlight on Big Cedar Lodge and the beautiful Ozark’s nature golf back in Sept., as golfers from around the world clamored for their chance to play Tiger Woods and TGR Design’s first public-access golf course featuring Bass Pro Shops founder Johnny Morris’ bonus 19th hole.

According to NBC, the live broadcast was reported as the most watched Tuesday telecast on NBC’s GOLF Channel since 2011. The live airing and recap of the match drew millions of viewers world-wide and was GOLF Channel’s most watched Tuesday – in total – since the Masters in 2018. Between the roster of world class players, the one-of-a-kind course complete with 300 million year-old limestone rock formations, and the engaging banter between the mic’d players throughout the broadcast, it’s no surprise this match broke more than a couple of records

In addition to a quality golf match, the Payne’s Valley Cup drew unprecedented attention for Missouri’s Ozark Mountains while advancing Morris’ lifelong goal to showcase the unique beauty of the Ozarks. The 19th hole, now seen as one of the most spectacular holes in golf, makes it clear the high-profile course is about much more than a round of golf. For Morris, Payne’s Valley is a chance to cultivate stronger connections between people and nature.

It wasn’t just GOLF Channel records that were broken; The Payne’s Valley Cup produced record interest across Big Cedar Lodge with golfers from Africa, Asia, Australia, Europe, North America and South America seeking to book tee times. This international interest resulted in the busiest week in Big Cedar Golf’s history. As the re-air approaches, the Big Cedar Lodge team is expecting another unprecedented spike in interest and inquiry as people around the world witness the captivating local landscape on display inevitably leading to a large impact on travel to the unparalleled wilderness destination in the Missouri Ozark Mountains.

WHEN:  GOLF Channel will be re-airing the match and recap as a major international feature on NBC on Dec. 26 and 27 from 4 – 6 p.m. ET

QUOTES:   “Johnny had the foresight to create something like this, and the Ozarks have obviously been known for fishing and hunting and being outdoors. What Johnny has been able to create up here with all the top [golf] architects—it’s just all a credit to him,” noted Tiger Woods at the Payne’s Valley Cup press conference.

“The beauty of the Ozarks is something you have to see to believe, and it’s extremely gratifying to know people will come here and be inspired for generations to come,” said Johnny Morris. “Golf is a great way to encourage people to spend more time outside in nature. The pace of the game, the peace and serenity of the surroundings, and the breathtaking beauty of the sightlines entice people from all walks of life with the opportunity to be reminded how special time in the outdoors can be.”