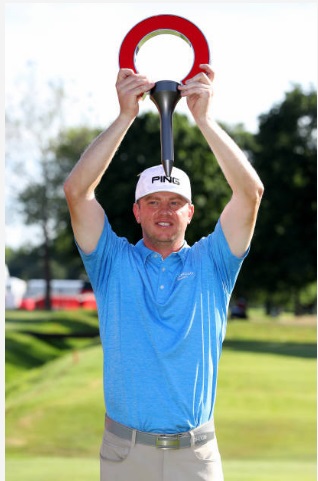 Nexbelt®, The Belt With No Holes, captured another win on the PGA TOUR this past weekend as Nexbelt Tour Ambassador, Nate Lashley, went wire to wire to capture his first ever PGA TOUR victory at the inaugural Rocket Mortgage Classic held in Detroit, Michigan.

Ranked No. 353 in the world, Lashley, as the third alternate, was the last player added to the field for the 2019 Rocket Mortgage Classic. He made the most of his opportunity though, as he never relinquished his lead throughout four rounds and finished 6 strokes ahead of the field.

As he approached the 18th green, the magnitude of what he had just achieved became suddenly very evident.

When Lashley was just a 21-year-old junior at the University of Arizona, both his parents, Rod and Charlene, and his girlfriend, Leslie, came to watch Nate in action at the NCAA West Regional at Crosswater Club in Sunriver, Oregon. Tragically, they would never see each other again. En route back to Nebraska in bad weather, the plane carrying the three people closest to him crashed near Gannett Peak, Wyoming’s tallest mountain. There were no survivors.

After experiencing a tragedy like that, most people would probably lose focus and ambition after but Nate incredibly regrouped and went on to become Arizona’s top player, earn All-American honours, graduate and turn professional.

This victory earned him a paycheck for $1.3 million dollars and moved him up to 40th on the FedEx Cup Points List.