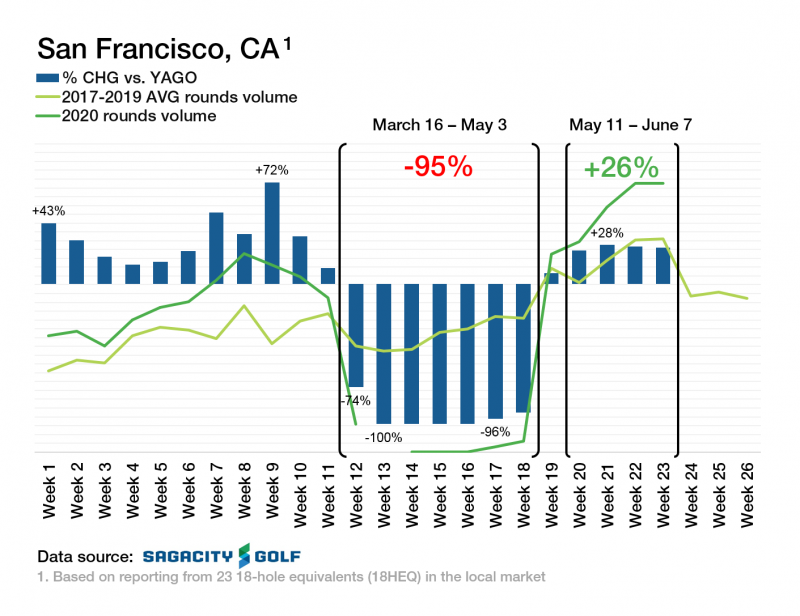 ‘Before and After’ Effects Show Rounds Surge in Several Key Golf Markets, With Participation Most Pronounced in Those That Had Restrictions

Jupiter, FL – With golf open for play in all 50 states throughout much of the month of May, the National Golf Foundation shifted focus to studying the effect COVID-19 and related government restrictions have had on participation and rounds played – both during the height of pandemic-related shutdowns and since.

In a recent survey of golf course operators, 88% indicate their rounds-played in May were the same or higher than normal for this time of year. Similarly, 96% of core golfers, among the game’s most dedicated participants, said they played more or about the same number of rounds as usual last month. In the latest NGF consumer survey, 86% of core golfers said they expect to play in the next two weeks and that continued engagement should also drive consumable spending (balls, gloves, shoes, apparel, etc.) as well as spending on durable products such as golf clubs.

Golf has been well-positioned throughout the coronavirus era as a healthy and safe outdoor activity, and because of this unique advantage, there’s been a lot of curiosity of late about the effects on rounds and participation overall. Over the past few weeks, NGF has received and shared a number of anecdotal reports suggesting a mini-surge in engagement — full tee sheets, lapsed golfers making their return, more families and new faces out on the golf course.

Using findings provided by Sagacity Golf, NGF took a deeper, data-driven look at engagement in several key golf markets, comparing 2020 weekly rounds volume to the same period over the previous three years. It’s noteworthy that the increase in golf participation is most pronounced in markets that had restrictions on golf operations, a clear sign of pent-up demand.

“It’s no surprise, but nonetheless jarring, to see the impact of governmental shutdown orders on rounds played,” said NGF President and CEO Joe Beditz. “In the San Francisco Bay Area, for example, the stop and re-start of golf is ever so clear, as is a meaningful surge in rounds since reopening a month ago – up 26% versus the previous three-year average. Surges are evident in other markets as well, and notice that even in non-shutdown markets like Orlando and Phoenix there were still significant ‘before and after’ effects.”

NGF’s weekly consumer sentiment study shows that the financial outlook of core golfers (those who played eight or more rounds in the past 12 months) is generally positive and now significantly better than it was nearer the beginning of this pandemic when uncertainty was peaking. Four out of five believe they’ll be in similar – some even better – financial position compared to pre-pandemic when fewer than 60% felt that same way.

“Golfers seem to be letting their spending belts out a notch too,” said Beditz. “This week we saw a significant jump in the proportion who say their spending has returned to a normal level (45%, up from 35%). And, as another measure of golfer confidence, the percent who’ve made an unexpected ‘big ticket purchase’ in the past 30 days has risen to 38%, up from 28% just a few weeks ago.”

For the latest data and insights, visit NGF’s special webpage dedicated to continuing research on the effects of the coronavirus on golf: https://thengfq.com/covid-19.

About the National Golf Foundation

The National Golf Foundation is a community of individuals and golf businesses committed to being the most well-informed advocates for the growth of the industry. With the world’s largest research team dedicated to golf, NGF provides members with the most accurate and objective insights on the game, while helping golf companies and organizations better understand their market and grow their businesses. The NGF is the only association for everyone in golf, and we advocate for growth by educating and connecting our members.