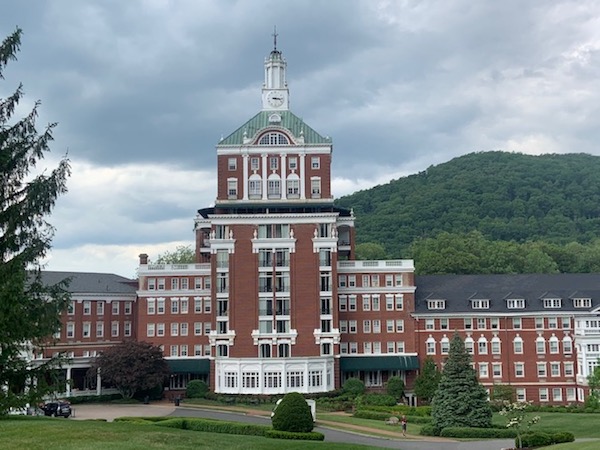 PHILADELPHIA, Pa. – Going down the list of the grand old hotels in America is a stunning, history-steeped process. The Omni Homestead Resort in Hot Springs, Virginia is one of them. It has been visited by 23 U.S. presidents. But there is no property on this heralded list that has more golf history than The Homestead.

Nestled in the Allegheny Mountains, The Homestead has specialized for many years in gracious hospitality and elegant charm … and golf. It is home to two historic and renowned golf courses.

The Old Course boasts the oldest first tee in continuous operation in America. The Cascades, built by renowned architect William Flynn and opened in 1923, is arguably the finest pure mountain golf course in the country. It has hosted eight USGA championships, including the 1988 U.S. Amateur Championship.

For all of those reasons, The Omni Homestead Resort will be featured in the June episode of the award-winning Traveling Golfer television show.

“This place is really a hidden gem,” says Director of Golf Mark Fry, who grew up in Hot Springs and has spent most of his life in the area. “Despite all of the events and all of the publicity the resort has gotten over the years, there are still many people who have never heard of us, or been to this beautiful part of the country. Hopefully, this show will change a lot of that.”

Show host Tony Leodora has known about The Homestead for years. He first came to the resort in 1987, on a writing assignment, then returned on two other occasions – one to cover the 1988 U.S. Amateur Championship.

“From my very first visit, I was overwhelmed by the grandeur of the hotel and the greatness of The Cascades golf course,” admits Leodora. “It took a few visits before I could take it all in. Now, more than 30 years later, I was pleased to see that The Homestead has gotten better with age. It should be a bucket-list destination for any serious golfer.”

The Traveling Golfer also airs a number of times in the Month of May on “Rivertalk” on HTC-4 in Myrtle Beach.

Responding to golfers’ never-ending demands to learn more about interesting golf courses and golf resorts across the country and around the world, well-traveled host Tony Leodora created the Traveling Golfer so he could take viewers on video trips to some of the most exciting golf locations. Four times in the last six years, the show has been honored as the No. 1 Golf Television Show in America in the prestigious International Network of Golf awards, presented at the PGA Merchandise Show.

The Traveling Golfer is a series of monthly shows hosted by Leodora, who has 20 years of experience in televised golf. The featured destination stays on the website for one month, before being replaced by a new show. Alternate shows also air in a two-month rotation. All old shows are archived for continued viewing on the YouTube Network and on the home website, www.travelinggolfervideo.com.

For more information about the Traveling Golfer, or to find out how a property can be featured on the show, call TL Golf Services at (610) 721-8186 or e-mail Tony Leodora at tony.leodora@TL-golfservices.com.