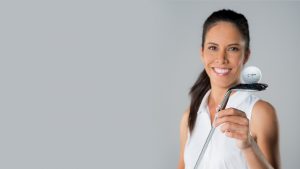 Buffalo, NY (May 21, 2018) – OnCore Golf is thrilled to announce the recent win by Tania Tare at the Dallas Cup Series at Alta Mesa CC on the Cactus Tour in Arizona.

Tania, whose trick shot videos have been seen by millions, has always said that her goal was to achieve status as a successful golfer at the professional level. This win marks the first event since joining Team OnCore and playing the ELIXR tour ball that Tare has finished first in competitive play.

“I’m excited about the progress of my game, and my recent move from California to Arizona to concentrate competitively in golf is paying off,” states Tare. “Not only do I love playing the OnCore ELIXR, but I find it’s the best ball for me off the driver and around the greens.”

The Cactus Tour is a development stage for women professional golfers who are looking to shape their game in preparation for competing on the Symetra and LPGA tours.

“We are excited for Tania. Signing her last September, we have seen nothing but dedication to her craft and the progress in her game was clearly evidenced this past week. We are confident we’ll see her playing on the main stage shortly!” states Keith Blakely, CEO OnCore Golf.

More About OnCore Golf
OnCore Golf is dedicated to delivering breakthrough technology and innovation, while inspiring golfers at all skill levels. Originally founded by two young entrepreneurs-Bret Blakely & Steve Coulton-the company now boasts a team of world-class innovators, executives, and partners. The company is committed to being an “innovator from core to cover” and has developed and launched an ever-expanding suite of differentiated products for golfers of all skill levels. Sold through the company’s website, pro shops, retailers, and distributed worldwide, OnCore currently offers the perimeter weighted Golf Digest Award winning tour ball, the ELIXR tour ball, the five star-rated AVANT with SoftCell technology to increase feel, durability and distance, and the extremely accurate, hollow metal core CALIBER golf ball.