~THE GIFT BOOK FOR THE HOLIDAYS~

Every decade or two a new voice rises above all others. With comparisons to Ernest Hemingway and Mark Twain,
Luke Reese is that new voice with his brilliant first book ONE FOR THE MEMORY BANKS. Reese actually delivers two voices as he tells the story of Allan Bond—his colleague and golf mentor—a character so big and colorful that early reviewers thought it was a book of fiction.
“Reese captures that relationship for eternity in this timeless and transporting book.”
—Michael Bamberger, GOLF.com, author of To the Linksland
Years ago, a wily Old Scotsman took a young American colleague under his wing. They both appreciated hard work. They loved to sell. To succeed. To win. And when they took to the golf course, the old Scot taught the young American the finer points of playing his way—match play. Yes, they loved to work together. But when they teed it up, they needed to beat each other. They were two of the fiercest competitors ever to be friends—two primeval boxers trading punches across the United Kingdom—and the chronicle of their impassioned duels and rollicking journeys has become one of the most entertaining, laugh-out-loud and heartwarming golf memoirs ever put to the page.
“ONE FOR THE MEMORY BANKS”, by Luke Reese (No. 9 Publishing House, Fall 2020) is a singular story of two men and their shared obsession. Allan “Bondy” Bond became Luke Reese’s golfing mentor and adversary…and a true friend. Over time, the two found themselves at the center of a swashbuckling band of golfing adventurers—Irishmen, Finns, Scotsmen, Belgians, Germans, Ohioans and ringers—who doubled as talented match play golfers and whose genetic wiring did not permit safe bogeys when a heroic death at the Alamo was available. Their other talent seemed to be inhaling air and exhaling well-formed quips that kept opponents laughing and decidedly off their games.
Although it reads like fiction, “ONE FOR THE MEMORY BANKS” is filled with author Luke Reese’s warm recollections of real events that took place with real people, however high their handicap. Each page teems with amazing stories of gamesmanship and old grudges; sudden death playoffs and striking beautiful shots at the wrong hole, hampered by drink and darkness; a hole-in-one in a two-club wind and two men hunkered in a bunker together in the middle of an intensifying storm. Reese and Bondy stole extra rounds from life every chance they got, often with Allan Bond sticking his tee into the ground (or sticking his approach a foot inside of Reese) and musing, “Here’s one for the memory banks”. And after many years and many escapades, their memory banks overflowed. 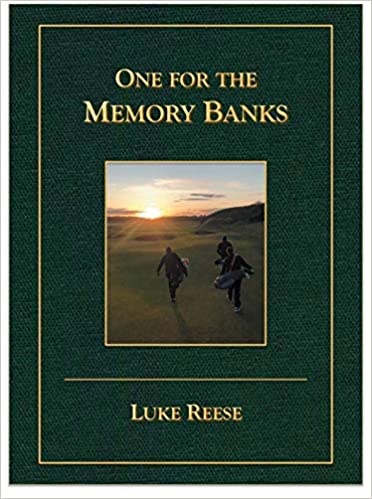 “(One for the Memory Banks) instantly jumped into my top 10 favorite reads about golf….
You can almost taste the wee dram of Scotch whisky
and feel the warmth of the fireplace after 18 holes in wind and rain….
It’s just good storytelling, economical in the style of Hemingway but powerful, poignant and laugh-out-loud funny.”
—Gary D’Amato, Senior Writer, Killarney Golf
“ONE FOR THE MEMORY BANKS” covers:
Luke Reese’s sincere and witty prose is a revelation in sports literature. “ONE FOR THE MEMORY BANKS” is deeply funny, but also a skillfully written and poignant memoir of a remarkable, emotional journey through life—and connects you to it.
“ONE FOR THE MEMORY BANKS” is easily consumed in one sitting, in a comfortable chair with a wee dram of Glenmorangie. Readers will live vicariously through stories of mayhem and bliss with the low hum of bagpipes echoing in the distance.
It is pure reading pleasure and undeniably one for the memory banks.
“I cannot recommend this book more highly.”
—GOLF WRX
“Luke’s vivid descriptions and economical use of words reminds me of Hemingway.”
—Ran Morrissett, Golf Club Atlas, GOLF Magazine
“His descriptions are so powerful, yet his wording so sparse, I would not have been at all surprised
if this book had been written by Ernest Hemingway himself.”
—Tee to Green Magazine (Ireland)
“Masterful storytelling transports the reader to each time and place
as if they were right there playing along—
a journey they will never forget.”
—Todd Martin, President, Peter Millar Golf
Author Bio
Luke Reese was born in a small town in Ohio and was taught to play golf by two low-handicapped Scots. He has worked in the golf industry for 30 years and is a panelist for Golf Magazine. He lives in Colorado and spends as much time as possible in Great Britain and Ireland.
About the Book
Title: “ONE FOR THE MEMORY BANKS”
Author: Luke Reese; Edited by Madeline Reese
Publisher: No. 9 Publishing House
Release Date: September 22, 2020
Details: Hardcover / 236 pages / $27.50
ISBN: 978-1-7351218-0-2