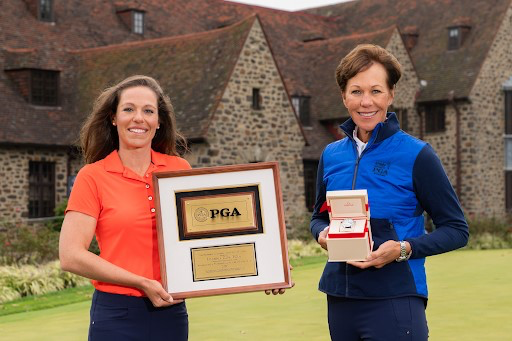 “On behalf of our nearly 29,000 PGA Professionals nationwide, it is my honor to present Joanna Coe with the 2019 OMEGA Women’s PGA Professional Player of the Year Award,” said Whaley. “Joanna represents the PGA of America in a fashion that is just exemplary. All of us see her as a role model, and for those who come behind her and follow in her footsteps and win this award, I can think of no one better to follow.”

“It is an absolute honor to win this award,” said Coe. “I strive to be a role model for young girls and for women, and people in general. I try to do everything to the best of my ability. I give it one hundred percent every single day. So, it is special to be thought of in that way.”

The PGA of America is one of the world’s largest sports organizations, composed of nearly 29,000 PGA Professionals who daily work to grow interest and inclusion in the game of golf. For more information about the PGA of America, visit PGA.com and follow us on Twitter, Instagram and Facebook.