ONTARIO, CANADA – Towel Tag announced today that PGA Tour Caddies, and Towel Tag Brand Ambassadors, Kurtis Kowaluk and Tim Giuliano, will be unveiling a Limited-Edition Towel Tag Combo at the Sony Open in Hawaii this week. The event is scheduled for January 10th thru 16th at the Waialae Country Club. 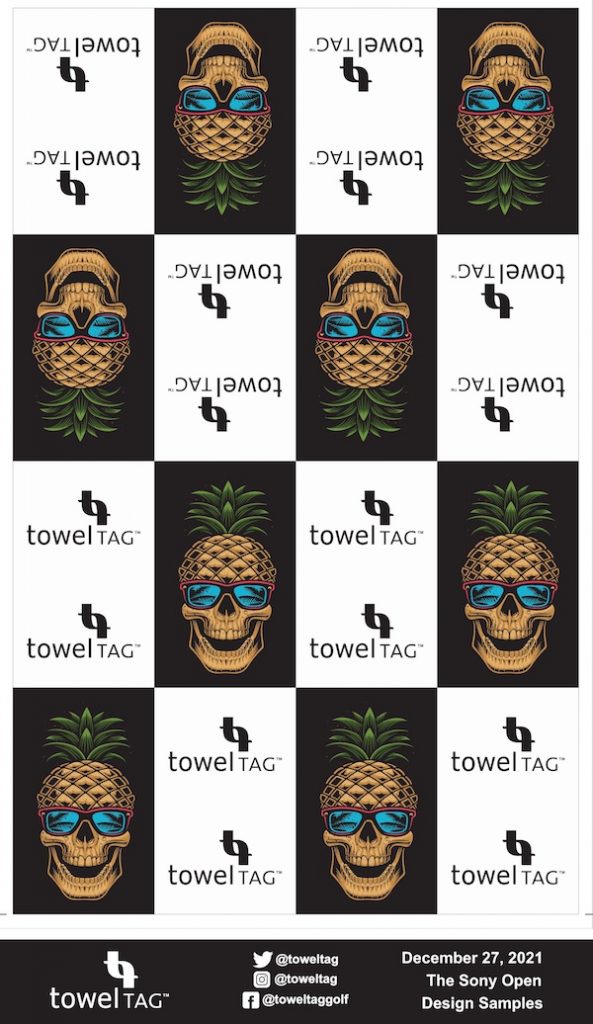 Each January the Sony Open in Hawaii attracts 144 of the world’s greatest golf professionals to the Waialae Country Club on the island of Oahu. The event is the largest charity golf event in Hawaii.  With a significant start of generating $256,000 for 43 charities in 1999, tournament charity proceeds is now $1.2 million annually benefiting more than 100 not-for-profit organizations each year and has raised nearly $22 million total for over 350 local not-for-profits.

“We worked closely with our Tour Ambassadors to create a design that would best represent the Sony Open,” said Craig Holub, Founder of Towel Tag. “We wanted to pay homage to the pineapples that Hawaii is so well known for…and honestly the Skull Character we came up with is just plain fun. These Towel Tag Combos will be on the bags of the PGA Tour Players Kurtis and Tim caddie for all week,” said Holub. “Keep an eye out for them during televised coverage of the tournament…they’ll be hard to miss!”

The innovative Towel Tag utilizes “Pull-Thru Technology” to create an entirely new generation of functional bag tags. Towel Tag is designed to temporarily secure your golf towel without the use of grommets or hooks. Each tag is manufactured using two separate compounds to create a functional bag tag with exceptional durability. They are ideal for temporary storage of golf towels, head covers, rain gear, outdoor and layered clothing. Towel Tag uses the latest printing technology to create a customized Towel Tag suited for every golfer, team, organization, or golf event.

Prior to the Towel Tag, most golf towels were secured to the golf bag by means of a standard grommet and hook like those used on a shower curtain. This traditional attachment made it very difficult to easily release the towel when required, for example as a player walks to the golf green to spot, lift and clean their golf ball after reaching the green and prior to lining up your putt.

“I decided to combine the simple features of the traditional bag tag and an accessible towel holder,” said Craig Holub, “and then we figured out a way to personalize it and make it unique for the golfer and unlike anything else currently available on the market.”

For more information on Towel Tag visit their website www.TowelTag.com.

Media members interested in doing a product review of the Towel Tag should contact Joe Wieczorek (joe@themediagroupinc.com) of The Media Group, (847) 812-7396.