Robert Trent Jones, Jr. returned to North Dakota to rebuild one of his earliest designs, saving the course—and nearby residents—from flooding

The course, originally built in 1975 near the Red River, was one of Jones’s earliest designs. Hugging the river’s U-shaped “oxbow” bends from which it took its name, the course quickly became recognized as one of the region’s premier layouts. 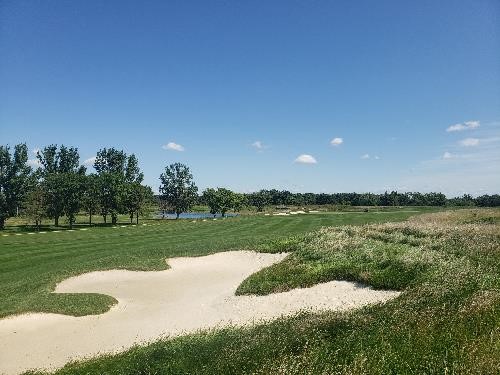 The five-year-long renovation program was largely instituted to mitigate flooding issues. Many years, in springtime and after common winter snow melt, the Red River would flood, putting the course and 42 nearby homes in jeopardy. The cities of Fargo and Moorhead formed a diversion authority that proposed flood protection for the entire region, including Oxbow.  The first phase of the diversion project involved building a levee for flood protection around the Oxbow community. However, the levee bisected the existing course, necessitating the relocation of the clubhouse and more than half the golf holes.

The “new” Oxbow golf course—with 18 new or renovated holes—is beautifully and subtly designed, featuring gorgeous prairie views and striking bluegrass and fescues. The wind, or “the invisible hazard” according to Robert Trent Jones, Jr., Chairman and Master Architect, comes into play on this wide-open layout. Accordingly, the RTJ II team made sure the fairways have enough room to play in any and all winds, leaving room for the ball to move. Some of the blue grass species selected can handle the winter winds and desiccation that occurs, while accents such as Ohio’s Best Sand in bunkers and concrete paths throughout the course will ensure that the new Oxbow remains the most impressive course in the region.

The land for the new holes came from a farm field just south of the existing course. “It was as flat as a pancake,” explained Bruce Charlton, RTJ II President and Chief Design Officer, “but we were able to fit in all the new homes and the relocated homes. It sounds a little like a jigsaw puzzle, but it was fun to figure out, tying existing holes with the new ones and giving them the same characteristics.”

That includes elevation. Eight of the new holes now play “against” the levee, which rises 14-20 feet above the landscape. And with the relocation, the course was losing its original river oxbow; Jones’s team created a new oxbow of connected lakes, using the excavated material to create further contour and definition.

“Having such accomplished golf course architects as Robert Trent Jones Jr. and Bruce Charlton work on a project of this magnitude and complexity was instrumental to Oxbow, ensuring that the Club’s tradition of having the finest golf course in the region was maintained, and in this case, enhanced,” said Sedi Halvorson, General Manager, Oxbow Country Club.  “Many course architects would consider having to build a golf course within a levee structure a hindrance.  Not only did the RTJ II team view it as a positive, they used it in such a creative way to bring wonderful elevations to the course, creating beautiful tee shots and overall course contours and views not commonly found in the plains.  It is truly a work of art.”

“We’re really proud, in today’s age of natural disasters, that the people there took a proactive approach,” said Charlton. “Knowing they get flooding, they did what they could to make their lives better. The course is a key component of the club and the city.”

Charlton added, “The city jumped on the bandwagon early to making the levee a big part of what they’re going to have into the 21st century, and we applaud them for their foresight.”

The course will be a fun challenge for the scratch golfer, with the championship tees playing at over 7,400 yards. However, five different teeing grounds and the addition of junior tees makes the course accessible for players at all skill levels. The course serves as home course to the North Dakota State Champion Kindred High School boys’ and girls’ golf teams.
With more than 280 golf courses in play worldwide, RTJ II golf courses continue to host tournaments on every major golf tour – most notably the 2015 U.S. Open Championship at Chambers Bay, 2016 U.S. Women’s Open Championship at CordeValle and 2019 U.S. Girls’ Junior Championship at Sentry World in Wisconsin.  RTJ II designs also have hosted special events such as the U.S. Amateur Championship, World Cup of Golf, The Skins Game, The Grand Slam, NCAA Championships, and others.

With headquarters in Palo Alto, Calif., Robert Trent Jones II Golf Course Architects (RTJ II) is the preeminent golf design firm worldwide, having created more than 280 courses in over 40 countries on six continents. Trustees of a great tradition of golf course architecture, RTJ II is committed to working in harmony with nature to craft the best golf course on each unique site. The RTJ II design team has experience in every aspect of golf course development and the ability to provide support and expertise from conception through completion of any project. For additional information, visit the RTJ II website at www.rtj2.com or contact the firm at +1 650-475-0329 or info@rtj2.com.