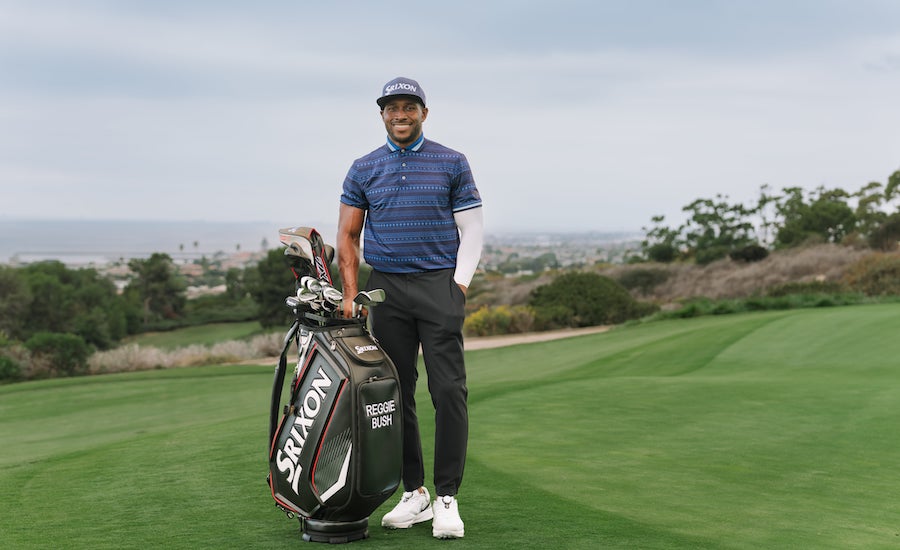 “We are thrilled to have Reggie join our Team Srixon ambassador program. His passion for golf made this partnership an easy choice, and we look forward to creating outstanding content with Reggie going forward,” said Noelle Zavaleta, Marketing Communications Director.

The Southern California native is widely regarded as one of the most electric college football players of all-time. During his college career, Bush earned All-American honors twice and was voted the best player in the nation in 2005. After college, Bush was drafted to play professional football and went on to play 11 seasons at the highest level.

Bush now works as an on-air college football analyst for Fox Sports, with the program ‘Big Noon Kickoff’ gaining positive reviews. His media presence is very prominent with over 5.2 million followers across his social media channels.

When he’s not in the broadcast booth, Bush spends his time on a new passion – golf.

“This is a dream come true for me,” he said. “I’m happy to be a part of Team Srixon and to promote this great sport to a new audience. Srixon/Cleveland Golf makes outstanding products and these clubs fit my game perfectly.”

Bush is a regular at PGA TOUR Pro-Am’s and has participated in the Icons Series, helping Team USA to victory in the 2022 event. Through his 619 Charitable Fund, Bush has hosted his own golf fundraisers to support causes close to him.

Bush will be gaming the following Srixon/Cleveland Golf products:

Be sure to follow us on all our social media channels to see new and exciting content from the Srixon, Cleveland and XXIO brands.

Based in Huntington Beach, CA and Greenville, SC, Dunlop Sports Americas (DSA) is the North American subsidiary of Sumitomo Rubber Industries, Ltd. We manufacture and sell premium golf and racket sports equipment to players of all skill levels under a portfolio of brands: Dunlop, Srixon, Cleveland Golf, and XXIO. DSA is also a licensed exclusive distributor of ASICS golf footwear. Our unique global sales network and infrastructure in R&D, manufacturing, and material science elevates our brands onto a global stage where we encourage players from around the world to experience our incredible products. For more information, please contact Noelle Zavaleta at noellezavaleta@srixon.com.